Breaking Down the Celtic Cross – Lesson 4: The recent past position

The Recent Past position

To the left of the mini-cross is the “recent past” position.  This indicates what is leaving the situation or recent events that are now beginning to fade.

That doesn’t mean that these events, good or bad, no longer have an impact.  Although they may be receding into the background, the imprint lingers but unlike the card at the bottom (the past) it’s not as strong.

In other words: this shows what’s leaving but also what you might be taking away from the situation. What are you bringing forward – or leaving behind?

Let’s look at an example.  Using the cards from the previous lesson on the Past position, we have the Two of Swords crossed by Strength and the Tower in the Past position.  If we put the Three of Swords reversed in the Recent Past, this would show a person who has gone through a major upheaval, perhaps a divorce, and has recently begun the healing process.  The healing  may be slow going but they are becoming stronger day by day. They might even look back and realize that this divorce was necessary. 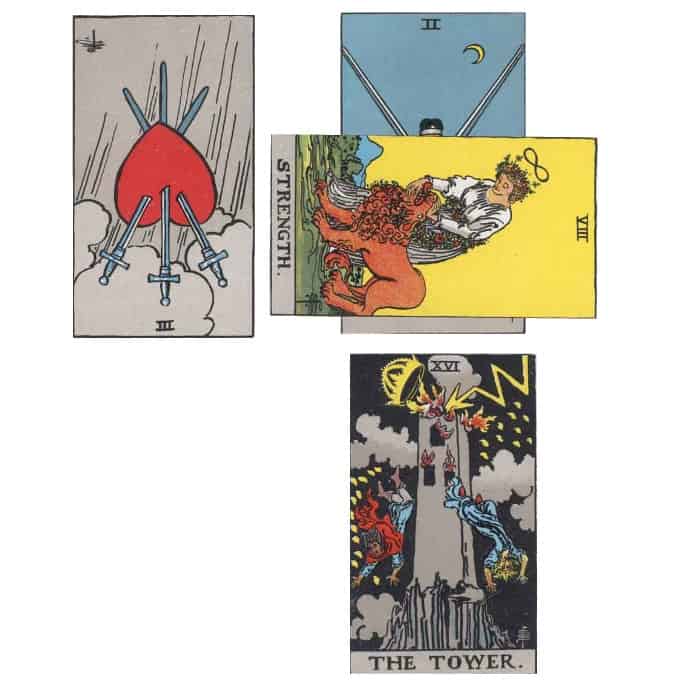 But what if the Recent Past was the Three of Cups? That might show that recently someone new entered the picture and it caused great upheaval in the querent’s life.  Now they are trying to make a decision between two partners.  The decision will not be easy to make because perhaps both partners bring something to the querent’s life. This will require much contemplation.

See how that works? 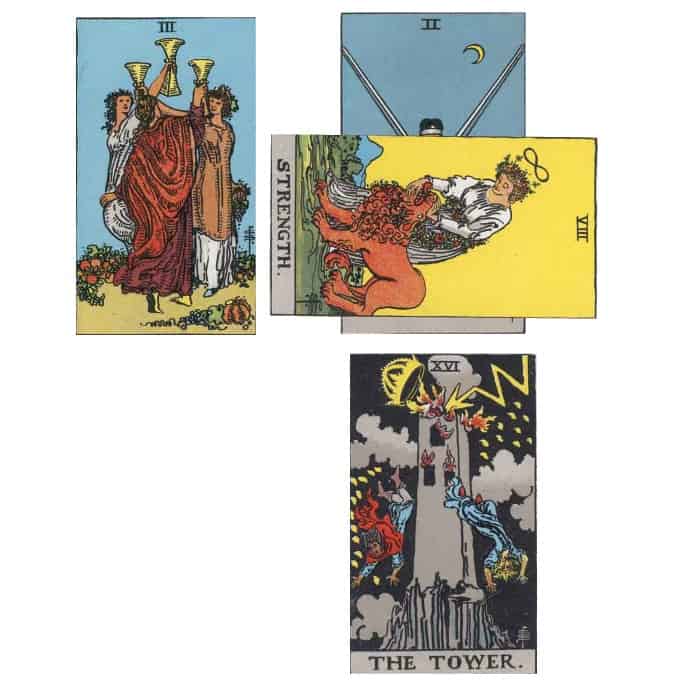 Again, the Tower is critical because it shows a massive change has happened – and that recent past card is giving you an idea of how this is shaping up.

What if the querent asked the questions “what are you bringing forward – and what are you leaving behind?”

In the first example, they may say that they are leaving the relationship behind and accepting a new beginning.  In the second example, the querent may realize that this new relationship has been a wake up call, a catalyst, to examine whether or not they are really happy with the other person.

Look at both the past and recent past – they are forming a foundation for the present moment. These two cards give clues as to how the querent got in the current position.

If the past cards are both positive, it could be symbolizing good decisions and a period of happiness or success moving into the background.  Both negative?  We’re coming out of a shit storm.  Both Majors?  Huge, important cycle is behind.  Both Court Cards?  Lots of people have been playing a role in the past – or the querent may be putting some people into their past.  Play around with these combos and start looking at what story they are trying to tell.