In this lesson, we’ll cover Neptune. 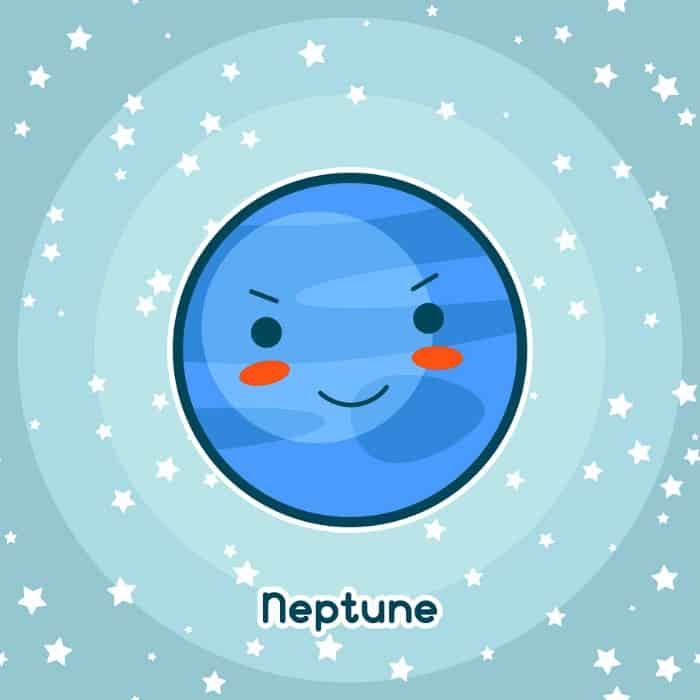 “You’re Neptune, right?” she asked. “Lord of the sea who washed up on the beach during the storm? Do you perform miracles? Because I could use a couple of them tonight.” ― Olivia Cunning, Tie Me

Dark and mysterious Neptune is the eighth planet in the solar system – and mighty far from planet Earth. This big beauty is named after the god of the sea (Psst…all I can think about is Jason Momoa as Aquaman when I think of sea gods these days. YUM.).

In astrology, Neptune symbolizes sacrifice. It’s where you need to give something up for a higher purpose. Let go and let god do the work. Dreams, spirituality, artistic imagination, mysticism, glamour, and all things psychic fall under Neptune’s realm. So does illusion, escapism, deception, confusion, and escapism when Neptune is in negative mode.

Neptune remains in a sign for about 14 years. As one of the outer planets, it affects a generation more than an individual. Where it lands in your chart and what aspects it makes will impact the individual. While Uranus symbolizes generational innovation and change, Neptune represents generational spiritual destiny.

In a future lesson, we’ll consider how Neptune affects the houses but for now…let’s just start with the general vibe, m’kay?

Aries: Neptune in pioneering Aries indicates a generation with original ideas around politics, spirituality, and science. The people with this placement have strong imaginations and instincts. They do well when they act on their intuitive hits. The negative side of Neptune in Aries is spiritual pride and egotism. Or it can indicate a chameleon-like personality which makes it difficult for people to see you as you are. Famous people with this placement: Mahatma Gandhi, Benjamin Franklin, Marie Curie.

Taurus: Neptune in down-to-earth Taurus indicates idealism around money and resources. People with this placement can be make money in unusual ways – or may be generous to a fault. That guy who gives the shirt off his back? Yep. When positively aspected, these peeps are also natural “law of attraction” types. They can manifest whatever they desire – or they can make money through mysticism or art. That being said, there are things to watch out for: for one, financial loss through fraud. Or they can be charlatans themselves, taking advantage of others through fraudulent schemes. Neptune in Taurus can also produce “poverty consciousness” or the starving artist mentality. They can swing between caring too much about money…or not at all. Famous people with this placement: Pablo Picasso,  Carl Jung, Coco Chanel.

Gemini: Neptune in brainy Gemini indicates advances in communication, literature, and education. It’s also a placement that favors inventors. Individuals with this placement can be intellectually gifted with great mental sensitivity. There may be an interest in foreign cultures or a desire to impact the public with their words. While Neptune in Gemini is excellent for mental dexterity, it can also produce the daydreamer who lacks mental discipline. In some cases, it can indicate an education cut short due to family responsibilities or lack of opportunity. Famous people with this placement: William Shakespeare, Earnest Hemingway, J.R.R Tolkien.

Cancer: Neptune in sensitive Cancer indicates a generation that holds high ideals around family and home. There are strong psychic ties to family and karmic lessons around the mother. Individuals with this placement are capable of making great sacrifices for their family – or country. For some individuals, this placement can produce strong clairvoyant tendencies and deep compassion – excellent qualities for anyone interested in working in the sacred arts. In a negatively aspected chart, it can indicate negative sentimentality, over attachment to the past, or a chaotic childhood caused by an absent or alcoholic parent. Individuals can also see their mothers in an unrealistic light – as some sort of “fairy godmother,” which may be far from the truth. Famous people with this placement: Bette Davis, Ronald Reagan, Simone de Beauvoir.

Leo: Neptune in Leo indicates a courageous generation with bright, charismatic leaders (John F. Kennedy had this placement!). It symbolizes idealism around politics, romance, and creative arts, especially motion pictures and drama. The energy is also highly sexual and flamboyant. Individuals with Neptune in Leo can be overly focused on pleasure (think: Roaring 20’s). In a negatively aspected chart, this can indicate a person who picks unreliable partners or may have trouble with children. In worst case scenarios, this can also indicate an egomaniacal dictator. Famous people with this placement: Audrey Hepburn, Marlon Brando, Nelson Mandela.

Virgo: Neptune in Virgo isn’t the happiest placement. The dreamy energy of Neptune is brought down to earth with a thud because Virgo demands details and service. On a high note, this can symbolize a generation with new ideas or inventions around heath, science, and work. It can also produce the humanitarians and healers who humbly serve the world. In it’s negative aspect, Neptune in Virgo can indicate psychosomatic illnesses, neurosis, material issues, or critics. It can also indicate trouble with faith – as in the skeptic. Famous people with this placement: Martin Luther King Jr., John Lennon, Elizabeth Taylor.

Libra: Neptune in Libra indicates a generation who has idealism around love, art, and peace. The “love generation” was born under this transit! In a positive sense, this can indicate new ideas around marriage and relationships. It can also indicate people who give it all up for love. This placement can also produce idealistic diplomats – people who do what they can to bring about peace on earth. By on a negative side, this can also indicate divorce, trouble with relationships due to seeing people as you want them to be rather than how they are. In some cases, this placement can also indicate war or war mongering. Famous people with this placement: Donald Trump, David Bowie, Oprah Winfrey.

Scorpio: Neptune in intense Scorpio amps up the psychic stuff 1000%. This placement tends to deepen the intuitive process and adds passion to feelings. It can also indicate a generation that experiments with sexual morality (think: love-ins and free love). Neptune in Scorpio can also bring innovation in medicine, taxes, and finances. People with this placement are naturally drawn to things that are hidden. They enjoy solving mysteries and getting to the bottom of things. If negatively aspected, it can indicate extremism, over dependence on a partner’s financial support, and trouble with drugs or alcohol. This placement can also indicate money loss through fraud. Famous people with this placement: Barack Obama, Johnny Depp, Madonna.

Sagittarius: Neptune in truth seeking Sagittarius indicates a generation that brings idealism to higher education, philosophy, and freedom. It can also bring innovation in medicine and a keen interest in helping developing countries. Neptune in Sagittarius produces wanderers who want to see how the other half lives. These lovely folks are deeply invested in the truth and knowledge – and may seek higher learning as a way to better the world. They also want to have faith in something. Which, if negatively aspected, can produce people who blindly follow cults or dubious religious leaders. Famous people with this placement: Angelina Jolie, Leonardo Di Caprio, Nicki Minaj.

Capricorn: When Neptune lands in disciplined Capricorn, it adds a practical flair to this dreamy planet. Instead of daydreaming, Capricorn likes to get to work. Hence: dreams can become a reality. This generation is interested in building – which means they may seek to create structures. Not just physical buildings, but also government and economic structures as well. They are interested in the earth – which can mean talent or interest in the environment.  These hard workers can be selfless through their careers – secretly working behind the scenes in some way – which can indicate trouble getting recognition for their achievements. In a negative aspect, it can indicate the workaholic who sacrifices the family for the career. Famous people with this placement: Rihanna, Helena Blatvatsky, Mark Zuckerberg.

Aquarius: In innovate Aquarius, Neptune has high ideals about technology, science, energy, and art. This generation (latest one: born between 1998 – 2012), may be invested in changing the world. These are the visionaries of the future – the ones who are interested in revolution and mankind. They could be responsible for remarkable achievements that could revolutionize the way we live our lives in the future. They may also be the unusual artists who take art and music in whole new directions. When negatively aspected, this placement can produce people who lack boundaries with friends – or who seek out unusual spiritual groups that may not be reliable. Famous people with this placement: Mark Twain, Jaden Smith, Thomas Edison.

Pisces: In dreamy Pisces, Neptune is in the sign it rules, which means the qualities of peace, mysticism, spirituality, and creativity are amped up. This generation can be the spiritual leaders who really do save the world from itself. Compassion will be strong in these sensitive folk – and they will be drawn to art, music, and healing. When negatively aspected, it can bring about escapism and addiction. Famous people with this placement: Oscar Wilde, Vincent Van Gogh, North West.

Homework! Grab your chart and look up your Neptune. What does this say about your generation? How is it manifesting in your world? What about other people you know? Check ’em out!

Next month, we’re going to focus on powerful Pluto.