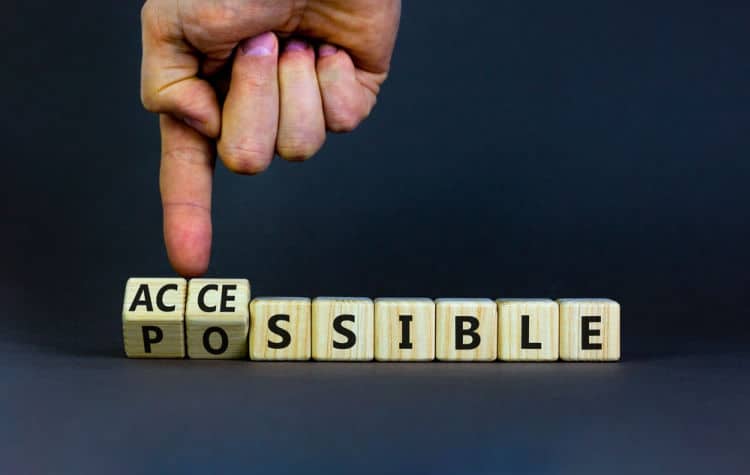 I’m an able-bodied person. This means I can do many things without struggling. It’s easy to take that for granted or to assume some tasks like shuffling tarot cards aren’t a big deal. But for some folks, even the act of moving the cards can be a challenge. For others, it’s impossible.

Over the years, I’ve worked with many disabled people, both as a reader and teacher. In addition, I’ve taught tarot, astrology, and yoga, so I know full well that accessibility is an issue that needs to be addressed in all spiritual communities.

While some people claim tarot is “going mainstream,” it cannot be considered genuinely mainstream until it is available for all members of the population. Therefore, it’s essential to think outside the tarot box to ensure all folks can access the wisdom of the cards.

Here are a few suggestions for making tarot friendlier for disabled folks.

Shuffling can be difficult if you have a physical disability. For example, after my father had a stroke, his left hand was clumsy. While he was no tarot reader, writing or opening a bottle became frustrating tasks. I can only imagine how he might have struggled to shuffle a deck.

For physical issues, different-sized decks may make all the difference. For example, some people might do well with a smaller deck, but others might find a larger-sized one is easier for hands that have trouble with shuffling.

It’s also possible to have a caregiver do the shuffling, or if you’re the reader, allow the querent to shuffle and cut instead.

Tarot apps are another option. Before you assume they don’t work – they do. I’ve had excellent readings from apps. As AI gets more intelligent, these apps will only become better and better. Apps controlled by a tap of the finger, a pen, or a voice could open up tarot to many people.

Tarot is a visual art. But what if your vision is impaired? Big cards with bold letters and numbers can be helpful. But for folks who are blind, Braille tarot decks give them a chance to participate, too.

The Tarot Garden has a few Braille decks in stock – and they offer a service to customize any tarot deck with Braille: https://tarotgarden.com/braille-service/

Some purists pooh-pooh the use of keywords on tarot decks. But for beginners, they are invaluable. Keywords on tarot cards are also helpful for folks with short-term memory loss, ADHD, or cognitive issues. This is a simple solution for anyone who needs help remembering what the cards mean. You can buy decks with keywords on them – or my favorite suggestion: grab a marker and put your own interpretations on the cards!

By the way, don’t assume this will harm intuition. On the contrary, keywords can help jump-start the sixth sense for many. I’ve drawn a blank occasionally – and decks with keywords have come in handy in those moments!

While the tarot is a visual art, it can still be inaccessible to the deaf community. Tarot readers like Chris Corsini use American Sign Language in their readings.

Let’s keep spotlighting readers like him, who are making tarot available for people with hearing issues.

We’re seeing better representation in tarot cards with decks such as the Next World Tarot. However, disabled folks are still vastly underrepresented. Creators need to remember that there are many people with disabilities, and they would love to see themselves in the deck (and not just one card).

It’s crucial to give a bigger platform for readers with disabilities as well. After all, the community is diverse – it’s time to show it.

Please keep in mind that some disabilities are not visible. It’s easy to make assumptions about people based on appearance. Therefore, it’s always best to reserve your judgment about someone’s abilities, whether they’re sitting at your tarot table or reading your cards.

These are just a few suggestions on making tarot truly a tool for all. What are some other ways to open the doors?

Here’s an interesting conversation about Tarot and Disability with Sara YK over on Tarot Bytes.