Tarot by the Mouthful – Judgement 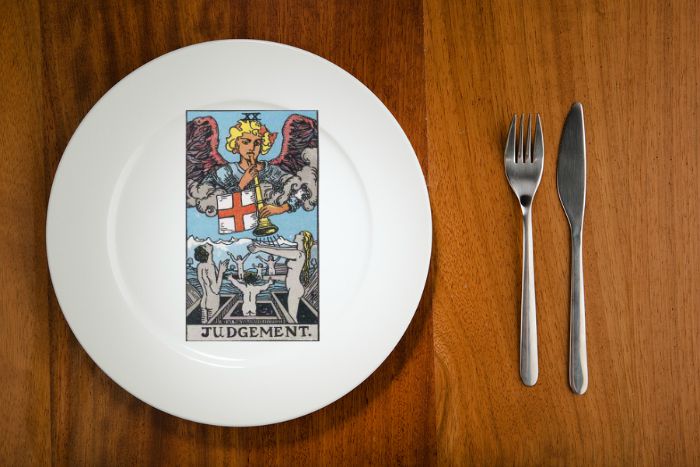 Judgement – Judgement symbolizes rebirth, renewal, redemption, and awakening. This is the “higher calling” and the end of the old, paving way for the new.  Major decisions.  The crossroads.  The reckoning and enlightenment.  The phoenix that rises from the ashes and spreads its wings.  This is big time transformation or regeneration. A rite of passage that takes you to the next level. It’s the moment when you are called to rise. Will you answer the call when it comes?

Kyle is knee-deep in filming the next season of Wisconsin Foodie, so you’ve got me this week, peeps.

It’s no secret that I love to cook.  When I’m not divining with the tarot, you’ll find me in the kitchen scouring recipes and slaving away over a hot pot of something.  It’s where my creativity operates the best. The people who are lucky enough to sample my feasts often remark that I should have been a chef.

There was a time way back when I toyed with the idea.

But like any good Gemini, I had other talents and interests that also spoke to me: law, make up artistry (I still fantasize about that one), journalism, photography, music (no musical talent sealed that deal) and, of course, tarot.  Always tarot.

It screamed at me even when I was fantasizing about what a catering company might look like.

It haunted my every thought when I worked in kitchens and bars and restaurants while I tried to find myself.  It stuck with me and to me.

Tarot found me.  I had to go that route and here I am…many, many years later…still reading tarot.

That’s the thing about when you receive the call to do something, to be something: you have no choice but to follow it.  You cannot deny it. While cooking is still in my blood, it’s not my life blood. The call to be a chef never came.

I have the passion to cook but it’s not the same as that deep, almost spiritual, devotion that we might describe as the “higher calling”.  It’s desire in the loftiest form.

Thomas Keller talked about the difference between a passion and desire in this snippet over at Co.DESIGN:

“It’s not about passion. Passion is something that we tend to overemphasize, that we certainly place too much importance on. Passion ebbs and flows. To me, it’s about desire. If you have constant, unwavering desire to be a cook, then you’ll be a great cook. If it’s only about passion, sometimes you’ll be good and sometimes you won’t.”

I am passionate about food and tarot but the laser-hyper-focus on my tarot craft never, ever leaves. While the fantasy about professional cooking is just that…a fantasy.

I know I’m not cut out for the rigors, the sweat, the body-pounding grind of chef work, which Anthony Bourdain describes with brutal candor in So You Want To Be A Chef.  I’m a wimp that way.

Ah…but tarot is not for wimps either!  We may not be pounding our bodies (although I say chairs are terrible for the human body) but we are diving into the soul, solving messy problems, dealing with delicate situations, and, at times, having to fend off the energetic vampires, mean-spirited cynics, and abusive jerks that circle our orbit.  We trudge through a world that wants to demean us, disprove us, and discriminate against us.  Tarot is not for the squeamish or faint of heart.  But we trudge on.  Because it’s our calling.

And that is the ultimate thing about a calling.  You do it no matter what.  Like the figures in the Judgement card, YOU RISE.  You rise to the occasion and you embrace it.  Because it’s bigger than you.

So what are called to do and what are you going to do about it?  Rise and shine, yo.

Books on chefs who burned with the desire:

The Devil in the Kitchen: Sex, Pain, Madness, and the Making of a Great Chef

Life, on the Line: A Chef’s Story of Chasing Greatness, Facing Death, and Redefining the Way We Eat

by Grant Achatz and Nick Kokonas.

Cooked: My Journey from the Streets to the Stove

The Reach of a Chef: Professional Cooks in the Age of Celebrity

I also recommend Michael Ruhlman’s excellent blog, Ruhlman. It’s a must read for the food obsessed.