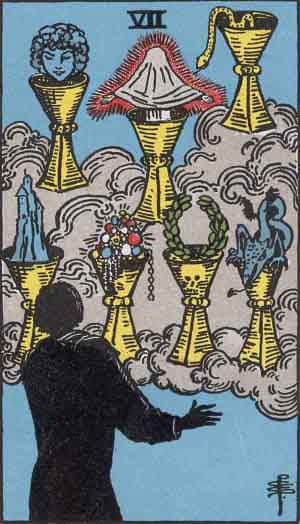 General meaning:  You may be dreaming and scheming.  Your head is in the clouds.  This is the card of daydreaming of what could be.  Can you find a way to bring those dreams down to earth and turn them into something tangible? The Seven of Cups can also indicate having many choices before you like a kid in the candy store.  It may be difficult to figure out which is the right one at this time. Don’t make a rash decision.  In a romantic reading, this card can indicate commitment issues.  “I don’t know what I want.”  Too much bling.

Reversed:  Things are becoming clear at last.  You now know what actions to take to move your dreams forward.  A choice may be made for you.  On a negative note, this could also indicate the end of a dream; being brought back to cold, hard reality.  Confusion.  An overactive imagination.  Having a hard time sticking to practical matters.

Affirmation:  I am willing to do what I can to make my dreams a reality.

Journaling prompt:   What dreams have you given up on? What are the dreams you would like to bring to life?  Journal about your dreams, both unrealized and desired.

You got big dreams
But you lacking action
Gotta make a move
It’s da law of attraction
Big shizz happens
With a plan of attack
Show dem haters
Your visions ain’t whack.