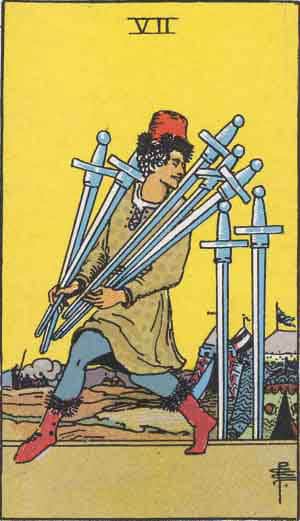 General meaning: Taking shizz that don’t belong to you.  This is the card of thieving, conniving, and sneaky actions. Copycats and biters.  Bullshitters.  Rip-offs and con games.  Criminal activity.  Are you trying to get away with something you know you shouldn’t be doing?  The Seven of Swords can also indicate a need to fly under the radar – a situation may be calling for stealth moves.  It can also represent a half-assed effort due to cutting corners and haste.

Reversed:  Getting caught in the act.  Going back to the scene of the crime.  Returning stolen goods.  Fessing up.  Coming clean.  Not getting away with the deed.  Punishment.  Revisiting a situation to make things right.  Cleaning up.  Doing time for your crime.  Do the right thing.

Affirmation:  I resolve to do the right thing, even if the other way looks easier.

Journaling prompt:  Have you ever gotten away with something? How did that feel?  Journal about your sneakiest moment, badass.

You been sneaking around
Like some sort of spy
Creeping and half-steppin’
And just getting by
But yo shifty self
Better clean up dat act
Cause yo grimey moves
Ain’t fixin’ to last.
Sooner or later
The hammer goes down
And you’ll be beastin and pleading
Like a busted ass clown
Do the right thing
And keep it trill
When you roll like that
It will all be chill.