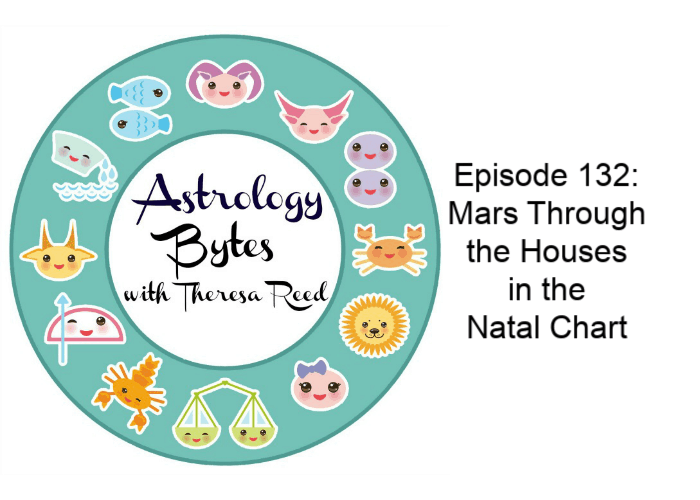 Episode 132 – Mars Through the Houses in the Natal Chart

Mars is the Red Planet and is named after the Roman god of war.

Where Mars is placed in your natal chart shows the areas of your life where you must take action. This is where you express your desires, passion, and leadership. If Mars is afflicted, it can indicate where conflict or anger shows up.

1st: Mars in the first house indicates an aggressive, outgoing, and courageous personality. If you’ve got Mars here, you want to be where the action is. You’re bold and not afraid to take risks. If Mars is afflicted, you may be headstrong and prone to temper tantrums. You’ll need to learn how to think before acting if you want to avoid drama.

2nd: Mars in the second house means you’re not afraid to hustle for your cash. You’ll work hard to achieve your financial goals and you may possess business acumen. You’re also competitive when it comes to money matters, which means you’ll do what you can to protect your own interests. If afflicted, you might be ruthless in your pursuit of material goods and not above using dishonest means.

3rd: Mars in the third house creates a fiery, passionate mind. You’re direct in your speech and can be aggressive when debating a point. Daily life is active as you’re not one to sit still for too long. When afflicted it produces a sarcastic, cruel tongue, and reckless driving.

4th: Mars in the fourth means you put a lot of energy into your home life. You may want to be the “boss” in the domestic sphere and could dominate family members. You’ll also want to improve your surroundings so may become handy around the home. If afflicted, you may have problems with your parents or other family members.

5th: Mars in the fifth house indicates you’ll be assertive in romantic matters. You’ve got a strong flirt game and will aggressively pursue the objects of your affection. You’ll probably possess a strong libido as well. If afflicted, Mars in the fifth could indicate sexual jealousy or unplanned pregnancy.

6th: Mars in the sixth house means you’ll be a hard worker and may bring a lot of energy to your working environment. You may be well suited for physical labor or a leadership role. You may not like to follow orders so you could be an entrepreneur too. If afflicted, you may experience burnout from too much work – or conflicts with coworkers.

7th: Mars in the seventh house indicates an aggressive role in relationships. You like to take control – and can get a lot done with partners if they don’t mind you taking the lead. This placement can also indicate an aggressive salesperson or PR agent – the kind who will push past boundaries to get what they want! If afflicted, it brings arguments with partners and acrimonious splits.

8th: Mars in the eighth house indicates a powerful intuition, strong desires, and sexual intensity. People with this placement are aggressive with other people’s money – which could be good or bad depending on the condition of Mars. For example, if afflicted it could mean criminal tendencies such as embezzlement. There could also be arguments over inheritances or taxes.

9th: Mars in the ninth house creates an adventurous spirit, one who wants to see the world and what it has to offer. If you have this placement, you’ll want to broaden your mind as much as possible through travel and education – but if afflicted, Mars in the 9th could produce a religious zealot or worse yet, a religious hypocrite who wants to force their fanatical views on others while not practicing what they’re preaching.

10th: Mars in the 10th house folks want to be recognized. They clamor for the limelight and will seek fame. If you’ve got this placement, you’ll be competitive, and willing to take initiative to get to the top. You could have political leanings and might make a fine politician. If afflicted, you’ll use whatever tactics you can to get ahead, even if they are unfair or ruthless. This could lead to a rapid climb followed by a downfall.

11th: Mars in the 11th mean you’ll put a lot of energy into friendships and group activities. You may be a leader in your community or involved in humanitarian causes. If afflicted, you’re a rebel without a cause or a rabble-rouser who wants to overthrow the status quo. Arguments with friends could find you alienated too.

12th: Mars in the 12th house indicates someone who prefers to operate in secret. Many actions are happening behind the scenes – and are perhaps influenced by the unconscious mind. This is a secretive Mars, which also means you could be a treacherous enemy because no one will see what you’re up to. By that same token, if afflicted, you may have plenty of secret enemies too.

Those are some mini thoughts about Mars in the natal chart houses. If you want to learn more, be sure to grab a copy of Astrology for Real Life – a No BS Guide for the Astro-Curious. I also recommend Planets in Houses: Experiencing Your Environment Planets by Robert Pelletier.

TheresSubscribe in iTunes, Google Play, or Stitcher – or use the mighty fine podcast player below to listen ‘n learn