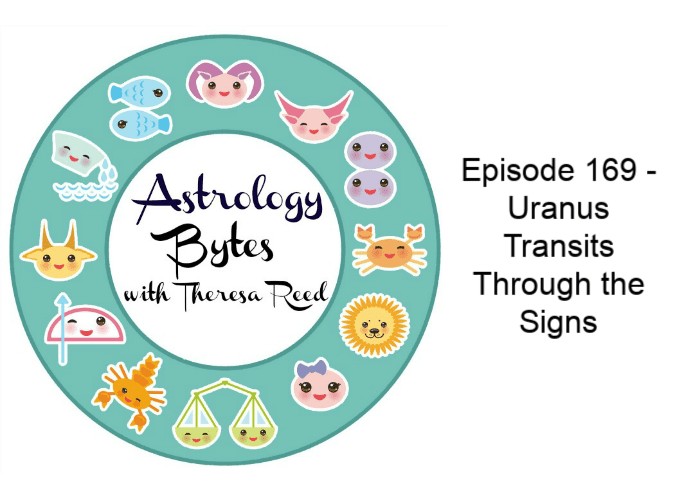 Episode 169 – Uranus Transits Through the Signs

Uranus hangs around in each sign for about seven years. Uranus transits are associated with change and liberation. We want innovation and freedom in the areas each sign rules. We might also experience shake-ups and wake-ups.

Aries – When Uranus is in Aries, we want to do our own thing. Aries is the pioneer and concerned with blazing trails rather than playing it safe. This is not the time for conformity. Instead, Uranus in Aries celebrates the rebels. However, taken too far, that rebelliousness could turn into selfishness.

Taurus – When Uranus is in Taurus, finances tend to fluctuate. While some risk is okay, it’s best not to gamble. You could lose a fortune if you do. This transit can bring unstable economies, inflation, and unexpected job changes. However, it can also deliver unexpected wealth. Sometimes Uranus in Taurus can affect the earth as in unpredictable weather.

Gemini – When Uranus is in Gemini, there can be amazing progress in technology, education, and transportation. Uranus likes being in the intellectual sign of the Twins. Here the mind is free to think, ponder, and learn. Get your science on, read a book, and take plenty of trips when this transit is going on.

Cancer – When Uranus is in Cancer, changes to the home or family could happen. For example, there could be technological advances for the home. Or perhaps funky decor becomes all the rage. It’s also possible that the traditional family unit could become untraditional in some way.

Leo – When Uranus is in Leo, innovations in art, music, or the performing arts are possible. This is a period where the new shakes up the old, and what was once “in” becomes “out.” Expect plenty of people getting their 15 minutes of fame now. Uranus in Leo may also lead to unconventional parenting. Instead of following the rules, the kids have room to breathe.

Virgo – When Uranus is in Virgo, there may be lots of changes around the workplace. People may move away from traditional jobs, or technology could make some work obsolete. New diets or health fads may be in vogue now. Whether those stay or die off will depend on how effective they are.

Libra – When Uranus is in Libra, relationships go through a revolution. For example, there could be large-scale cultural changes that impact the way people meet, marry, or live together. It’s also possible a desire for freedom may play a role in how folks feel about commitment. This transit can bring about divorces or sudden changes in long-term relationships.

Scorpio – When Uranus is in Scorpio, what’s considered taboo comes out of the closet. Secrets are revealed, sexual liberation is hot, and everyone wants to get it on! This transit is ideal for testing out new technology for sex too. The economy could be somewhat erratic, so it’s best to keep an eye on your money if you want to avoid loss.

Sagittarius – When Uranus is in Sagittarius, changes to travel, education, and spirituality are possible. New methods of traveling the globe, as well as education reform, could radically alter the way we see the world or learn. Radical religions could be on the uptick. During this time, you’ll want to explore new worlds and keep an open mind about other people’s belief systems.

Capricorn – When Uranus is in Capricorn, there could be massive changes in government. Democracies could rise and fall. It’s also the time to question traditional values. For example, if you’ve always gone along with the customs of your family, maybe you’ll want to change that up. Transiting Uranus in Capricorn can also open the door for new types of businesses or innovations in corporations.

Aquarius – When Uranus is in Aquarius, it is at home because Uranus rules Aquarius. You can expect bold ideas, revolutionary thinking, and massive technological advances. You might also experience sudden changes in your friendships. For example, you might move and end up with an entirely new circle of pals. This transit is favorable for humanitarian goals, but it can also bring about radical ideologies.

Pisces – When Uranus is in Pisces, there is a war between logic and fantasy. While this could be an excellent transit for avant-garde art forms and music or sci-fi writing, it can also open up the door for far-out belief systems. We tend to do a lot more navel-gazing during this transit. Prison reform, as well as technological advances in hospitals, is also possible.

That’s it on Uranus transits through the signs! Next up: Neptune.