When I fall in love with someone or something, I go full-tilt gooey-eyed gaga. Like shout it to the rooftops gonzo! HELL YEAH! If you’ve been hanging around my tarotlicious world, you might have seen me in all my geeked-out tarot lovin’ glory over the Sawyer’s Path Tarot Tiles, the newest coolness from tattoo artist Jamie Sawyer. In fact, I called it the G.O.A.T. – Greatest of All Tarot!

These 78 tiles feature her Sawyer’s Path tarot cards – and might just be the most versatile thing I’ve encountered in a long time. I’ve been experimenting with using the tiles in readings, as footnotes, with other divination systems, and as mini-altars. You guys: these ROCK.

It was time to sit down with the genius behind the tarot tiles and find out how this all came together. Read on as I chat with Jamie Sawyer, tile fanatics: Jamie: I’ve been interested in aspects outside of normal society since I was a child. My mother never forced a spiritual path upon us, and there were times I can remember my friends saying that she was a witch… Like that was a bad thing?! Hahaha. But seriously we’ve always lived a free path. My love for tarot sparked in 2000 when my mother and I visited Salem and I got my first oracle deck, the Faeries Oracle by Brian Froud.

My first (tarot) deck was The Morgan Greer Tarot. I can’t remember how or when it came into my life, I feel maybe my Mother gifted me that around the same time. I love that deck still to this day, it’s borderless edges and deep colors heavily influenced my own deck creation. I love art, and especially art that tells stories, which made tarot a “no brainer” for me. It wasn’t until about six years ago that I really started an in-depth practice for my self-reflection. I love seeing Tarot in everyday actions and life. I can often be quoted at my studio referring to someone’s life event, that they’ve shared with me, as a specific card.

2. What inspired you to create your Sawyer’s Path Tarot – and Lenormand decks?

Jamie: I was asked to do a Two of Cups as a tattoo, stylized with specific key symbols for my client. I enjoyed creating that so much, that I thought “I wonder what my version of the Queen of Swords (my signifier) would be like…?” After I sketched my Queen, I realized I had started drawing my deck. It wasn’t something I planned to do or even thought that I would complete. It took two years to finish because life kept happening. I had to make peace with the fact that it would be finished on its own terms. It was birthed simply because I wanted a physical deck.

As for Sawyer’s Lenormand, I felt called to create that about six months after Sawyer’s Path was finished, and I had been doing a daily practice. It just made sense. I had a few Lenormand decks, so I was familiar with the system. The imagery I drew as if I was preparing a tattoo drawing for a client, it was fairly easy with that approach. I am currently working on an oracle deck featuring the sentient beings that we share this world with.

3. Your Sawyer’s Path Tarot Tiles is my new favorite thing. Where did you get the idea to create these?

Jamie: I often say that “I have a busy mind with a lack of vices”. I am always looking at new ways to take my art with me, functional art. I have made pendants out of resin in the past, mini orgonite pieces, wearable energetic art. Once Sawyer’s Path was in the physical form, I wanted to take some of my favorite cards with me, pendants, keychains… I dusted off my resin making tools and made my birth and soul cards into resin pendants. I loved how those little pieces look, so I decided to make a full set- at the time they didn’t have the wooden backs, just pieces of resin with the card art and perhaps a crystal or two.

The wood tile came later, it was born out of a necessity for bubble control. You see, the resin is so finicky and sometimes bubbles get stuck in the curing process. Due to the nature of how I was making those pendants – the images went in face down into the mold so I often couldn’t see if I got all the bubbles out. My brain started searching for something I could coat from above and then manually get rid of the bubbles with my torch to get an almost glass-like finish. That’s how I stumbled onto what I am now making.

When I have an idea, I’ll normally have a working prototype within a week. It’s just how it works. Must be my Gemini sun. I made a Lenormand set at first because 36 tiles is a much easier undertaking than 78. Then I did the Majors only, but couldn’t stop there… I integrated the burnt backs shortly after to add another layer. Like I said, my brain is a busy place.

4. Without revealing your secrets, can you give me an idea of what goes into creating the tiles and boxes? How much time does this take?

Jamie: The Tarot sets can take up to eight hours to make. The Lenormand maybe about five. The tile backs are burnt on my laser engraver, each set takes about three hours of burning time. This used to be done by hand by me and a wood burner, however, due to a concern for my own personal lung health, and a want to be a bit more productive, I started looking into laser engravers. A good friend of mine recommended the one I ended up getting. It’s still my art and handwriting on the backs with my unique touches, it just frees me up to work on multiple sets at a time.

After the engraving, I burn them by hand to give a distressed look. For the card images, I use high-quality photo paper, again hand cut. The resin is the make or break part of the process. The science has to be just right or else it won’t cure properly. I also used to hand make each box, with color scrapbook paper and fun themes, but with my laser engraver, I now offer a puzzle style box that is art based off the deck backs. I do still offer the paper constructed boxes, but the wooden ones seem to be the people’s choice. They are a labor of love, and I love that they are being so well received. 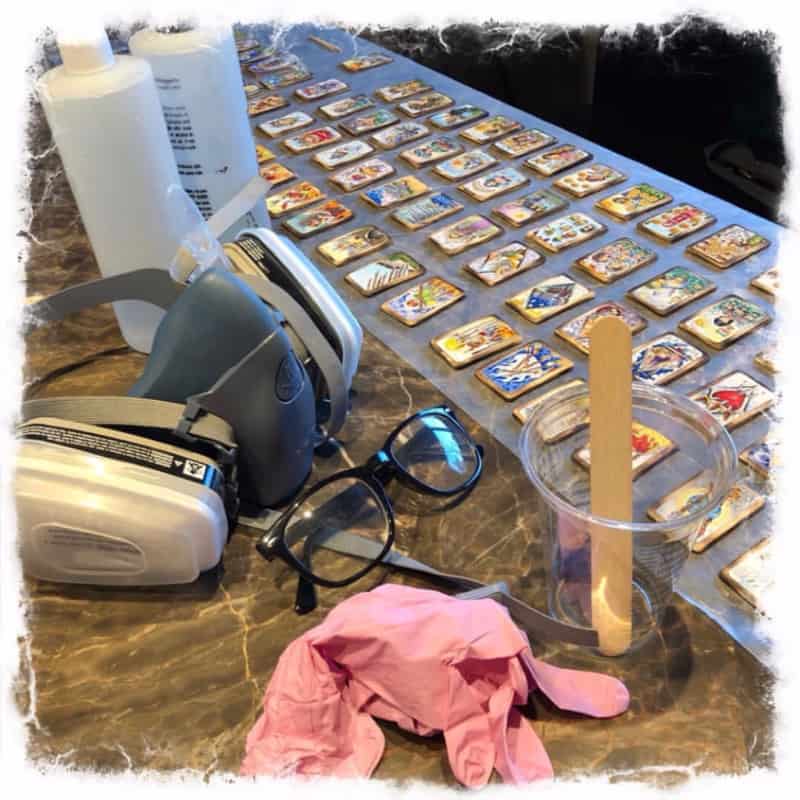 5. Which tarot card is the most requested for tattoos?

Jamie: Hmmm. That’s a good question. Over the years I have done, as mentioned the Two of Cups, a couple of Towers and Strength. But oddly enough I’d have to say the Three of swords, I have done the most. I think it’s a way for the client to mend their heart, use it as a talisman to show how far they have come on their journey, or they just like the imagery. I love doing Tarot related tattoos and look forward to welcoming more into my studio!

Big thanks to Jamie for taking the time to share her process. Folks: GET THESE TILES. I’m serious when I say that they have really given me a new set of tarot eyes!

Bio:
Jamie Sawyer currently lives in Eastern Pa, with her partner, Tim, and basset hound, Barney.  When not creating unique goodies for the esoteric community she‘s a Tattoo Artist who owns her own private studio. Her mind is constantly thinking up new things so what she’s making today may not be the same thing she’s making next year.

Buy her cool stuff – and get a tattoo:
https://jamiesawyer336.com
Www.SacredSpaceTattoo.com