What are significators in a tarot reading? 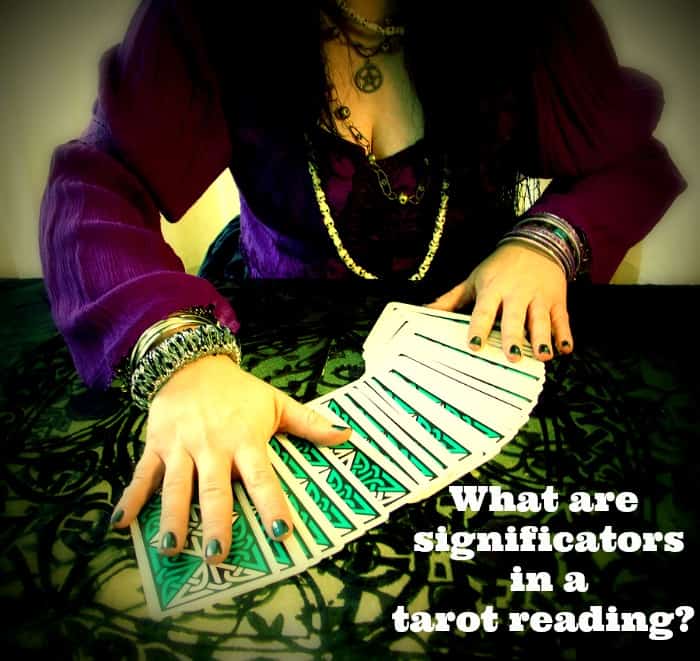 From time to time, a student will ask me about significators in a tarot reading.  What are they?  Are they necessary in tarot readings?  Do I have to pick them?

A significator is a card that is consciously chosen to represent the questioner (or a person they are asking about). Some spreads may require a significator, but often, they are optional.

There are many methods for choosing them.

My favorite method is to choose one via age, gender, and astrology sign (if known).  For example, an Aries woman would be the Queen of Wands while a young Gemini male would be the Knight of Swords.

Another method would be to choose a card based on the querent’s appearance. A young child who would be fair-haired and blue-eyed might be the Page of Cups while a dark-haired older man might be King of Pentacles.

Also, remember: sometimes the rules above are not hard.  A man who might be the King of Pentacles may be acting more like a lovesick young male – which would make the Knight of Cups a better representation.

Another tip: everyone inhabits male/female energy. Be willing to bend genders. Once, I did a reading for a man and the Queen of Pentacles reversed showed up in the reading.  I started describing a dark-haired woman who was not very practical and perhaps clingy.  He stopped me and said “I’m gay.  BUT that describes my partner to a T.”   I’ve seen Kings represent female bosses, Queens represent stay-at-home dads, Pages represent grown adults who are doing immature things, and Knights represent young lesbians.  Be open-minded and don’t assume that everyone is going to be a “traditional” Court Card. (See my post on Gender-Bending The Tarot.)

Sometimes a Major Arcana or other cards may be a better representation of a person.  For example, The Empress is perfect for a pregnant woman while the Eight of Pentacles might be good for a workaholic.

For a couple, you may want to choose The Lovers or the Two of Cups.

In some tarot readings, you may need to choose a card to represent a situation. Examples: the Eight of Wands might be chosen to represent a trip; the Three of Cups is perfect for a party or a love triangle.

For readings about a person who has passed on, you can choose a card from one of the Court methods above or if you do not know the birthdate, use the High Priestess.

So the question – are they necessary? It’s a matter of personal choice. Some readers use significators for every reading.  I don’t.  I have some spreads where I feel that they are important, but mostly I like to assume the right card will come up to represent the ENERGY the person is transmitting (or needing) at the time of the reading.

The best path: play around with them.  See if they make sense to YOU or if it works in a particular spread.  If you like working with them, go ahead and add them to your readings.  If they don’t, feel free to skip them.

Check this out: Lisa Boswell has some good info on this topic too.

Prefer to listen? Here’s a Tarot Bytes episode you may like.