Today we’re talking about Rulerships, Dignities and Debilities – another layer that will deepen your understanding of the planets ‘n signs.  This is also known as “essential dignity.”

The dignities refer to the strength or weakness of a planet’s position by sign.

In layman’s terms: some planets are happy in certain signs and not so happy in others. It’s kind of like wearing jeans – your favorite pair fits you well and makes you look like a million bucks – plus you can move about freely in ‘em. Other pairs…not so much. If you’ve ever had to lay down on the bed just to squeeze yourself into a too-tight pair that accentuates all the wrong places, you know what I mean.

That’s dignities in a nutshell.

There are four essential dignities:

Rulership: This is when the planet sits in the signs it “rules”, which means it’s at home.  The planet functions well. (Using our jeans analogy: this would be your favorite brand of jeans – the reliable brand you know always works for your body.)

Detriment: When the planet is in the opposite sign it rules, it’s in detriment – or weak. The planet’s energy becomes watered down or negative. (This is like an old pair of jeans that no longer fits and makes you grumpy every time you see it in the back of your closet.)

Exaltation: Exalted means it’s the best expression of the planet. A planet that is exalted is strong and positive. (This would be like that ultra-expensive pair of jeans that fits like a dream and flatters every curve. It might even have some bling on the pockets.)

Fall: If the planet is opposite the exaltation, it’s considered in it’s “fall” – total weak sauce and the most negative expression of the planet.  (This would be the cheapo brand of jeans that is completely wrong for your body and makes you look as dumpy as possible. They don’t fit and it sucks to be in them.)

If a planet doesn’t fall into any of those categories, it’s considered “peregrine.”  (This would be like a pair of black jeans – they look good on most people but can still be prone to spills and tears with the wrong use.)

Let’s use the Moon as our planetary example.

The rulership is Cancer. Here, the Moon, which rules emotions, is sensitive and affectionate. There is an easy connection to feelings and intuition. Cancer Moon people are said to be emotional types who can express their feelings with ease.

The detriment then would be Capricorn, which is opposite Cancer.  Capricorn Moon peeps get a reputation for being cold and calculating. Instead of the free-flow emotions of a Cancer Moon, this Moon tends to be repressed.

The Moon is exalted in Taurus. This placement produces a steady, grounded personality. Someone you can always count on like a big ole rock.

The opposite of Taurus is Scorpio – hence, the Moon is in its fall when in Scorpio. This Moon tends to be mysterious, possessive, and sneaky. (But psychic as heck.)

Side note: one time a curious student asked me: “Why are certain signs exalted or bad? What makes a Taurus Moon better than a Scorpio Moon?”

Truthfully, I had no good answer because I’ve known Taurus Moon people who are unreasonable and hard to handle – and being a Scorpy Moon, I think we’re pretty awesome!  I have zero idea why someone came up with these concepts (had a bad experience with a Scorpio Moon?) but hey, I didn’t invent this shizz so there ya go. It just is. That’s all I got fer ya.

In modern astrology, the dignities are less important – the aspects tend to be emphasized instead. I feel that you should learn them though. Why? It just is.  Haha!

Anyhow – here’s a handy-dandy little chart I made for you to help you remember ‘em.  (Note: some astrologers have different dignities for a few – these are the ones I was taught back in the day.) 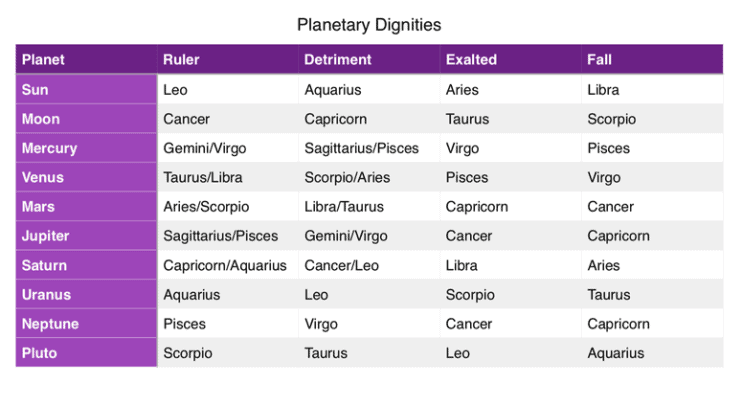 Note on Mercury, Neptune, and  Pluto: there is disagreement amongst astrologers on where Pluto is exalted. Some say Leo while others say Pisces. Still, others say Aries. Heck, some people don’t even think Pluto is a planet any longer! You might also find Mercury exalted in Aquarius and Neptune exalted in Leo. Sigh. I’ll go with this chart at the moment.

Let’s look at Kim Kardashian’s chart. See anything exalted? In its ruler? How about detriment or fall?

What might any of this have to say about her?

Homework! Grab your chart and that handy dandy planetary dignities chart – see if you’ve got anything exalted…or not.