Retrograde. It might as well be labeled as astrology’s F word. Mention it and you’ll hear the groans kick in.

Even those who are not astrology-fluent seem to know about the transit fuckery that is Mercury retrograde. It’s that time of the year when Murphy’s Law seems to be in full swing. What can go wrong, often does.

But what about when a planet is retrograde in your natal chart?

When a planet is retrograde in your natal chart, it means that instead of the outward projection of the energy, it’s more inwardly focused or inhibited. The expression tends to be hidden but may still be felt strongly by the native. I also find that the energy can sometimes be difficult to handle and may be expressed in a clumsy or bumbling manner. It might even be completely repressed.

There is a school of thought that says this about retrograde planets in the birth chart: the energy was not allowed to be expressed outwardly when the native was young. Think: the parent who discouraged the child from using their outdoor voice inside. Suddenly, instead of being the boisterous you that you want to be, you’re restrained. It’s like that.

What is retrograde anyways?

It means the planet has slowed down its orbit. To the human eye, it might appear to be going backward. It’s not. Just chilling a bit.

The Sun and Moon are NEVER retrograde.

All of the other planet go retrograde. Mercury does about three times a year.

You can figure out which planets are retrograde by looking for that little R or “prescription” symbol.

On average, most birth charts have two or three retrograde planets.

If you have zero to one retrograde planets in your birth chart, you’ll develop your life skills early on. You might even feel that you don’t have to “go inward.” However, if a planet retrogrades in your progressed chart (advanced stuff we’ll cover way down the road), you might feel a sudden urge to get your ass into therapy.

If you have four or more, you might feel like an alien – different from everyone else. You might be more inwardly focused and reflective. Instead of conforming to the norm, you march to the beat of your own drum with your own value system. You may not develop your life skills early like the zero to one example above, but by going inward, you develop wisdom.

Let’s quickly cover what those retrogrades might mean in your birth chart:

Mercury: this makes the mind reflective. Information is processed differently and learning may be best though absorption or experiential methods. The mind can be self-critical and the person can sometimes feel disconnected from others. This is an introverted expression of the planet and may produce a personality that tends to enjoy quiet time. Sometimes Mercury in retrograde can indicate communication issues or an inability to express thoughts comfortably.

Venus: this retrograde can function two different ways. One, it can indicate trouble expressing romantic feelings. This can be seen as shyness or fear of intimacy. It doesn’t mean that they aren’t deep – they are. They just have trouble opening up. Trust will be vital for these types. The other side of the coin is the narcissist. One who loves themselves above all others. I have seen Venus retrograde show up this way too. People with Venus retrograde have to work on self-love and healthy expression of love.

Mars: here, the fiery planet gets watered down. Expressing aggression and anger becomes inhibited. Asserting self feels like a major challenge. In the worst cases, it can produce a passive-aggressive quality. Competition isn’t their forte and they prefer to compete only with your self. Mars retrograde people can be afraid of risks. In some cases, this can indicate an inability to take action – the person who sits on the fence post and never seems to make a decision. The native must learn to take action and stand up for themselves.

Jupiter: this produces a highly philosophical mind and a rich, expansive inner life. They may be a bit reclusive and unconcerned with material wealth. They develop their own sets of beliefs and may be armchair philosophers. These are the ones most likely to reject their parent’s beliefs.

Saturn: on the outside, they are stoic. Inwardly, a bundle of nerves and worry. This can sometimes manifest as rigidity or need to micromanage things. They’re not paranoid, per se, but they want to feel in control of something. Responsibility is serious stuff for them. Other times, it produces the opposite, especially if they grew up in a home where order wasn’t important. Then they tend to be unambitious and undisciplined. Saturn retrograde people are never down with authority. It makes ‘em nervous or rebellious.

Uranus: that line “she’s a lady in the street, freak in the sheets” might have been written about a Uranus retrograde person. No, not everyone with this retrograde is a pervert but do know that they often hide their eccentricities. They appear conventional but are inwardly unconventional. This is the “inner rebel.” Sometimes this retrograde produces a person who is afraid of change and might cling to the old ways.

Pluto: the inner power struggle. The Pluto retrograde person has suppressed anger and issues around power and control. They don’t like to be controlled but they also don’t like to admit their own desire to be in control of matters. Perceptive and capable of deep transformation but just don’t piss ‘em off or try to tell them what to do. Can be explosive if they feel betrayed.

Keep in mind: the sign that the planet is in and the house it sits in also will make a difference in how this retrograde energy manifests. For example, a retrograde Saturn in Scorpio in the 8th house would be super rigid around sex matters while a retrograde Saturn in Aries in the 6th house might produce a boss who loves to micromanage their employees.

Let’s look at former President Barack Obama’s chart to see where there might be some retrogrades lurking about: 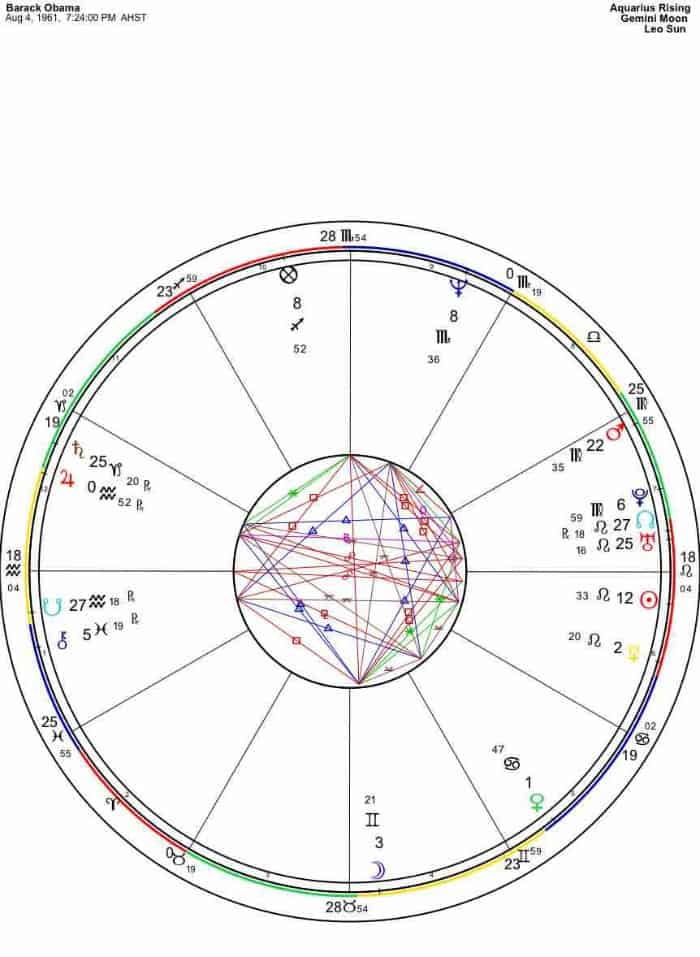 What does this tell you about him?

(Psst his Chiron and Nodes are retrograde but we’re not working with those in this lesson. That stuff comes later, dude.)

Let’s look at Kim Kardashian’s chart. Any retrograde to speak of? What is this telling you about her?

Homework! Grab your chart and look up the retrogrades. What might they say about you?

Next month, we’re going to focus on luck ‘n expansion with mighty Jupiter.