In this lesson, we’ll cover Uranus. 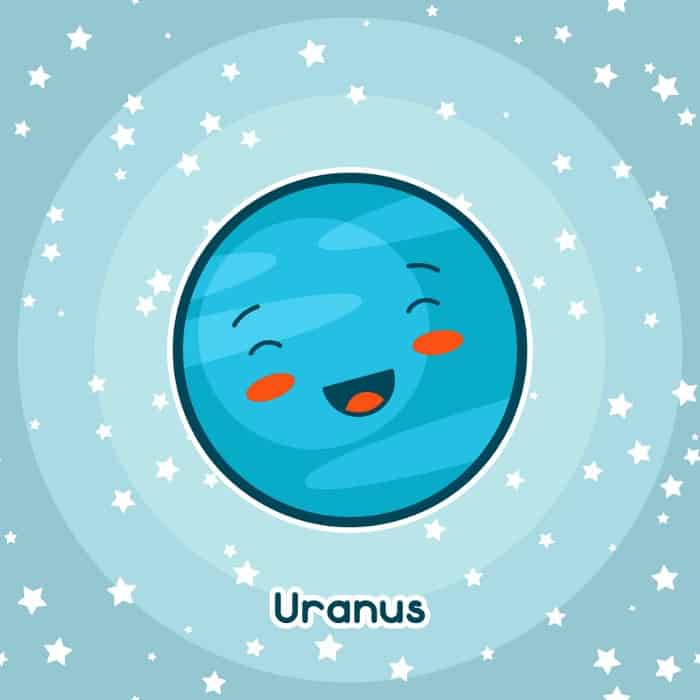 In this month’s post, we’re checking out Uranus. Go ahead – get your giggle on (Uranus always gets a laugh) and then let’s get to it.

Uranus is one of the slower moving planets. It stays in a sign for about seven years, which means it has a long time to work it’s mojo. But that also means that as a sign, it won’t have as big of effect on an individual chart until we consider which astrological house it lands in – and what aspects it makes to other parts of the individual’s chart. Instead, the Uranus sign, like the signs in the other slow moving planets (Neptune, Pluto), is more of a “generational” influence.

I know, I know…you want to know how this is gonna affect you personally. We’ll cover all of the planets through the houses in future lessons so hold your horses, peeps. But for now – bear with me.

On it’s own, Uranus is associated with originality and individuality. It is the planet that loves to look at the future. Things such as technology, science, and innovation fall under it’s rulership. Uranus can be rebellious or enlightened – sometimes both. This planet can also symbolize drastic changes – or the unexpected. It’s quirky, erratic, and a bit unpredictable. Kinda like life!

Where it lands in your chart shows where you are original, eccentric, or perhaps like to rebel a bit. This is where you stand as an individual. (I have Uranus in the 11th house – which means I am a lone wolf at heart but enjoy running with diverse packs at times.)

It’s the David Bowie planet – and if it had it’s own theme song, it would be Rebel Rebel:

For now, here is what Uranus is all about in the various signs:

Aries (1927 – 1934, 2010 – 2018): Uranus in fiery Aries is concerned with freedom and originality. This is the placement of pioneers and leaders. At it’s best, it can create positive, motivational individuals who can lead the public in exciting new directions. At it’s worse, this placement produces impulsiveness, hot tempers, political fanatics, violence, and people who do things without thought of the consequences. The type who want freedom at all costs for themselves without thought of the other? Me me me! That’s the negative side of this placement. Famous people with this placement: Elvis Presley, Elizabeth Taylor, Che Guevara, Martin Luther King Jr.

Taurus (1934 – 1941, 2018 – 2025): This is a generation with lots of resourceful ideas about money. Money can come and go in unexpected ways and these peeps know it. If they are operating on the high side of this placement, they may invest wisely or manage their cash flow in creative ways. They may even make money in unusual careers. They can also have new ideas about practicality or the economy. In some cases, they may go the opposite side of the usual materialistic route of Taurus and work on behalf of the poor. If moving to the negative side of this placement, they can be stubborn to the point where they are unmovable, or there may be too much attachment to possessions or family. Famous people with this placement: John Lennon, Napoleon, Pope Francis, Sophia Loren.

Gemini (1941 – 1948): Uranus in Gemini is a fab placement for it enhances the mind and produces innovative ways of thinking. These are smarty pants folks, who are inventive and quick thinking. They may produce new concepts in science, literature, media, tech, or education. If negatively aspected, it can produce restlessness or mental instability. It can also indicate someone who is erratic in their speech or who may use media in an unpredictable, unwise way. Famous people with this placement: Donald Trump, Hilary Clinton, David Bowie, Ted Bundy.

Cancer (1948 – 1955): I find this to be a mixed bag. On one hand, Uranus in Cancer produces the maverick in the family. This is the cool Uncle Butch who bucks the family traditions, leaves home early, and goes off to live in a disco commune. That. Or it may be that they live in unconventional families or funky homes. This placement can also indicate innovations around the home or family life. In some cases, the early home life might be somewhat unstable. But the other hand is a moody one, which can produce volatile dispositions. Living with these types – it ain’t easy. Famous people with this placement: Steve Jobs, Vladmir Putin, Oprah Winfrey, Sting.

Leo (1955 – 1961): Like Uranus in Aries, this placement can produce bold leaders. The benevolent kind who inspires everyone to do their best. Barack Obama has Uranus in Leo. He inspired a lot of people with his message of hope. Uranus in Leo tend to have different ideas about love and parenting. They may be overly permissive with their children or they may expect them to be like little adults before they are ready. Uranus in Leo can also be excellent for theater, which could mean inspired actors, musicians, performers, or writers. If leaning to the negative, this placement can produce a theatrical persona with a big ego. Famous people with this placement: Madonna, George Clooney, Prince, Bono.

Virgo (1961 – 1968): Uranus in Virgo can produce original ideas around work and efficiency. These busy bees can find unique ways to get work done – or they may prefer to work at home, where they can do their thing in their own way. Innovation in health, science, tech, electronic inventions, ecology, and labor relations all fall under this placement. In some cases, the individuals might have unusual pets. The negative side of this placement can be health problems or hypochondria. As a member of this placement, I have learned: never read WebMD. When I do, I’m convinced that I’m dying. Ha ha! Famous people with this placement: Johnny Depp, Albert Einstein, Nicole Kidman, Kurt Cobain.

Libra (1884 – 1890, 1968 – 1974): This placement is romantic but not the most stable for relationships. Uranus wants freedom while Libra wants partnership. So you can imagine how this works out: “let’s get married…oh wait…I want to be single…wait…I want you back.” (If it’s in your 5th house, this is especially true – Liz Taylor had that placement!). Unusual partnerships or ideas about marriage fall under this placement as well as new concepts about justice. Changes in law are possible during Uranus in Libra, when people become more concerned with rights and fairness. On the negative side, it’s maddening for relationships. Famous people with this placement: Angelina Jolie, Jennifer Lopez, Eminem, Jay-Z.

Scorpio (1890 – 1897, 1974 – 1981): Uranus digs being in Scorpio. It’s super psychic here and brings intensity as well as a desire to remake everything. There is a tendency to want to tear things down to the bones and regenerate, which can produce powerful leaders. But this energy needs to be tempered for it can bring about a destructive side. A determination to bring change must be managed prudently to avoid fanaticism. Uranus in Scorpio can also bring unusual ideas about sex. The try anything once mantra? Yep. Famous people with this placement: Beyoncé, Kim Kardashian, Kanye West, Isaac Newton.

Sagittarius (1897 – 1904, 1981 – 1988): Both my children have this placement and I must say, they are pretty smart individuals. That’s because Uranus in Sag expands the mind and gives in interest in higher education as well as philosophy. Individuals with Uranus here create their own concepts around religion and the world. In fact, many of them like to see how the other half lives so they travel the world. Those who don’t travel find other ways to immerse themselves in other cultures. Which means this placement produces adventurous intellects who want to understand and improve the world. It’s super humanitarian in nature. I don’t have too many negative things to say about this placement except it can produce skeptics or dogmatic peeps who like weird cults. Famous people with this placement: Lady Gaga, Lana Del Rey, Prince William, Mark Zuckerberg.

Capricorn (1904 – 1912, 1988 – 1995): Uranus in Capricorn vacillates between wanting to tear down the government and business structures to doing things the “right way.” They can be revolutionaries or dictators. Why? It’s because Uranus demands freedom while Capricorn likes to preserve the status quo. This produces an energy where you see the fight against convention side by side with the need to preserve. It’s conflicted as can be. In a positive sense, it can lead to innovation in government, business, and science – or old ideas may be used in new ways. In the negative sense, it can lead to strong ambitions or controversial public figures. Famous people with this placement: Taylor Swift, Justin Bieber, Howard Hughes, Miley Cyrus.

Aquarius (1912 – 1919, 1995 – 2003): Uranus rules Aquarius, so it’s right at home here. This placement bestows intellectual gifts and intuitive insight. Individuals with Uranus in Aquarius are independent thinkers and with big ole humanitarian hearts. They tend to have a wide, diverse circle of friends and will often give their shirt off their backs if they think you need it. Truth and freedom for all – that’s their motto. Uranus in Aquarius can produce genius changes in technology, science, and humanitarian efforts. On a negative side, it can also lead to stubbornness or eccentric, harebrained ideas. Famous people with this placement: John F, Kennedy, Helena Blavatsky, Nelson Mandela, Albert Camus, Kylie Jenner, Malala Yousafzai.

Pisces (1919 – 1927, 2003 – 2010): Uranus in Pisces is about as idealistic as it gets. This placement produces sympathetic natures with strong mystical leanings. A desire to help save the world and creativity times ten can create artistic genius or saints. Intuition is amplified here but so are religious leanings. These types seek spiritual liberation – and they may look to a church or through some other mystical path to find it. There is a desire to be done with materialism. New ideas about spirituality and art may arise during this time. On a negative side, this placement can also bring about cults, impractical idealism, or escapist tendencies. Famous people with this placement: Jesus Christ, Marilyn Monroe, Nostradamus, astrologer Linda Goodman.

Homework! Grab your chart and look up your Uranus. What does this say about your generation? How is it manifesting in your world? What about other people you know? Check ’em out!

Next month, we’re going to focus on dreamy Neptune.