In this lesson, we’ll cover Pluto. 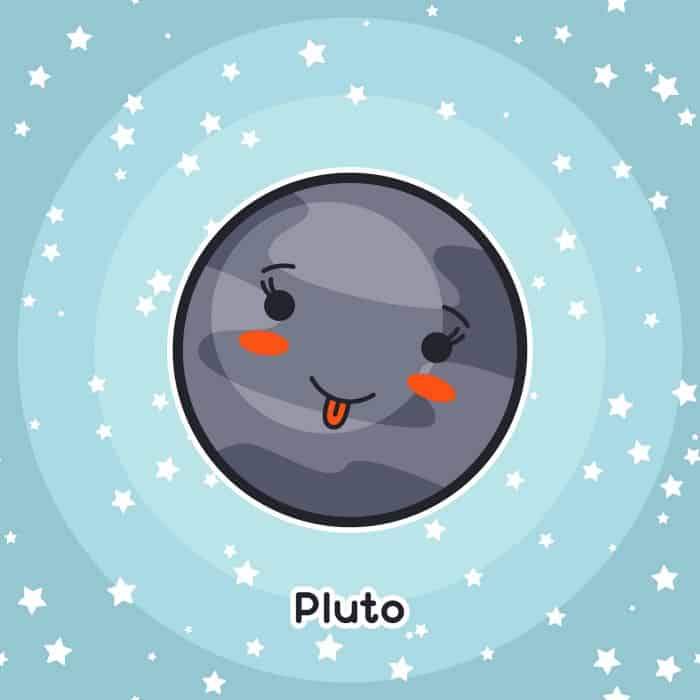 Ah Pluto. Not that long ago, Pluto was demoted from official planet to dwarf planet because it’s not as big as the other guys. Since astrologers have been working with this little plutoid, it still has a place in astrology.

Pluto is the ruler of Scorpio and symbolizes transformation, revelation, and rebirth. This slow moving planet takes about 246 years to move through the zodiac – which means: it hangs out in each sign for a long time. Therefore, Pluto is more about a generation. Whereas Uranus symbolizes generational innovation and Neptune covers generational spiritual destiny, Pluto represents generational transformation.

Like the other slow moving planets, the placement in the houses and aspects will affect the individual chart. More on that in a future post.

But for now, here’s an idea of how Pluto operates in each sign:

Aries:  (1822-1853, 2068-2098) This placement of Pluto symbolizes a generation who likes to take action. The spirit is pioneering, self-reliant, and courageous. The focus is on freedom – even if that means enduring struggle. The energy can be extreme at times – but that’s how revolution happens. Good at starting reform, not always too hot at finishing the job. Famous people with this placement: Helena Blatvasky, Friedrich Nietzsche, Mark Twain.

Taurus: (1853-1884, 2098-2129) Pluto in Taurus indicates a generation that is concerned with finances and material goods. This can indicate a time of economic change, uncertainty – or expansion. In some cases, this placement can indicate greed as well as the great divide between the haves and the have nots. Famous people with this placement: Albert Einstein, Mahatma Gandhi, Marie Curie.

Gemini: (1882-1914, 2132-2159) Ideas get super-powered when Pluto is in Gemini. This is a generation that is rich with revolutionary ideas. Science and invention flourish under this placement. New forms of communication are created. Many great inventors were creating incredible inventions during this period, including Tesla and Edison! Famous people with this placement: Salvador Dali, Coco Chanel, Walt Disney.

Cancer: (1914-1939) When Pluto is in Cancer, it indicates a generation that is concerned with family, home, and domestic affairs. The focus may be on the homeland, which could indicate an interest in nationalism. Revolutions in home and agriculture as well as changes in the family structure also fall under this placement. Under Pluto in Cancer, Fascism was born. Famous people with this placement: Marilyn Monroe, Elvis Presley, JFK.

Leo: (1937-1958) This is the placement for the Baby Boomers. Pluto in Leo indicates leadership and concern with power as well as desire for creative self-expression. During this period, power struggles are possible. International issues come to a head. In fact, this period marked the beginning of World War II. Famous people with this placement: Donald Trump, Hillary Clinton, David Bowie.

Virgo: (1956-1972) The Pluto in Virgo generation is focused on work, health, and technology. Changes or advancements in the work environment as well as medicine fall under this realm. During the period when this placement was active, labor unions gained more power. But now, many of the people born during this placement are undoing that. Famous people with this placement: Barack Obama, Jennifer Lopez, Jay Z.

Libra: (1971-1984) Those born under Pluto in Libra will be interested in art, social justice, and relationships. Ideas around marriage and partnerships changed during this period – and this generation may bring more shifts around the concept of relationships as well as legal matters in the future. Famous people with this placement: Angelina Jolie, Leonardo DiCaprio, Eminem.

Scorpio: (1735-1747, 1983-1995) Pluto digs being in passionate Scorpio, the sign of death and transformation. This generation may be interested in sex, death, and financial matters. Those born under this influence may bring a new sexual revolution as well as changes in end-of-life care or even assisted suicide. Taboo subjects become the norm. Famous people with this placement: Rihanna, Justin Bieber, Emma Watson.

Sagittarius: (1746-1762, 1995-2008) Philosophy, higher education and travel fall under Sagittarius. When Pluto is in this sign, it marks a generation that may be keen on exploring far away places (space?). They may be also be deeply interested in religion – or may abandon it altogether. Remember, Pluto likes extremes so these folks may be gungho or completely against it. Advances in higher education could also be of interest – which could mean the rise of different types of learning including more focus on learning via tech versus in-person schools. Famous people with this placement: Nostradamus, Lorde, Jaden Smith.

Capricorn: (1762-1778, 2008-2024) As of this writing, Pluto is currently in Capricorn. The last time it was here was during  1762-1777 – the period of the American Declaration of Independence! This placement indicates a generation that is concerned with remaking government. New ideas around business, government, authority, and power. Famous people with this placement: Napoleon I, Mademoiselle Lenormand, Prince George of Cambridge.

Aquarius: (1778-1798, 2024-2044) The last time Pluto was here was during the French Revolution. Because Aquarius focused on brotherhood, group activities, and humanitarianism, people born during this placement will be concerned with political freedom and changes around humanitarian work. This marks a time of advancement in technology and social concerns. Age of Aquarius? Might be. Famous people with this placement: Mary Shelley, Louis Daguerre, Samuel F. B. Morse.

Pisces: (1797-1823, 2044-2068) Pluto in dreamy Pisces can indicate a period of creative genius. People born under this placement may seek to transform art, culture, and spirituality. An interest in mysticism, psychology, intuition, and social welfare may bring about changes or advancements in those areas. Do keep in mind that Pisces when taken to extremes, which is possible under Pluto’s influence, can also indicate problems with drugs. Addiction could be a serious issue under this period. Famous people with this placement: Abraham Lincoln, Florence Nightingale, Karl Marx.

Homework! Grab your chart and look up your Pluto. What does this say about your generation? How is it manifesting in your world? What about other people you know? Check ’em out!

Next month, we’re going to begin focusing on the planets through the houses. Shit is getting good!