Our last lesson focused on the basic characteristics of the signs.  I know, I know…it may have seemed like a lot to learn – but astrology is like an onion with tons o’ layers.  We gotta peel them off bit by bit.  That takes time so do give yourself the gift of going at this slowly and returning to the lessons as often as you need to (they aren’t going anywhere!).

This month, we’re turning our focus on to the planets. 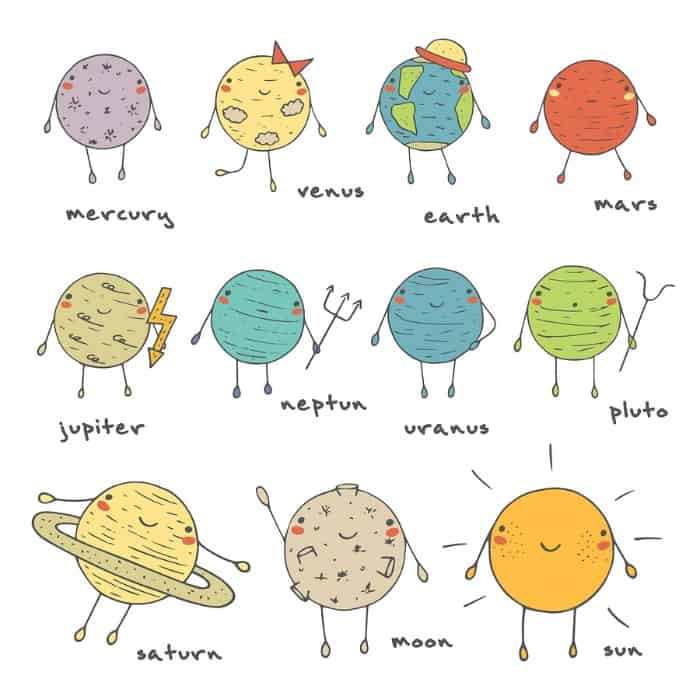 The planets represent different facets of our personality or life.  Each one is connected with a different function – and depending on what sign they are in, the planet may roll along with ease…or not.

The “personal planets” are the ones that move quickly through the sky and are thought to influence our personality as well as how we interact with other people.  The planets in this lineup would be the Sun, Moon, Mercury, Venus and Mars.  (Note: the Sun and Moon are also referred to as “luminaries” and they never go retrograde.)

The “outer planets”  or “collective planets” are the slow-moving heavy-weights, which are more about what’s happening in the world or society.  (Do note: BUT where they land in your personal astrology chart and how they interact with other planets will be important to YOU, yo.  More on that in a later lesson.)  Jupiter, Saturn, Uranus, Neptune, and Pluto are in this group.

Sun – the Sun rules your basic personality. This is your ego and will, the “core” of who you are.  The Sun also rules the men in your life or the masculine element in you. This is what you read in the astrology column.  (Note: the Ascendant is the face you present to the world but the Sun is your “real” self.  More on the Ascendant in later lessons.)  The Sun rules the sign Leo.

Moon – the Moon rules emotions, intuition, and how you express your feelings.  It also shows how you parent and how you might view your mother. This is the feminine side of your personality. I also find that the Moon gives clues to what a man might be seeking in a relationship. The Moon rules the sign Cancer.

Mercury – named after the “Messenger of the Gods”, Mercury symbolizes communication, intellectual reasoning, and how we learn. Mercury rules the signs Gemini and Virgo.

Venus – Venus describes how we love.  This is our romantic side.  Venus also symbolizes beauty and leisure. This is the receptive, feminine side of sex.  Venus rules Taurus and Libra.

Mars – fiery Mars symbolizes what drives us – including our sex drive!  It’s also energy, ambition, and war. Think: lust + aggression.  (Note: always check a person’s Mars before engaging in a fight with them. There are some people you just don’t mess with.  Mars in Scorpio for one.)  Mars is where I look to see what a woman might need in a relationship. Mars rules Aries and Scorpio.

Jupiter – Jupiter rules our potential. This is where we have oodles of talent or good luck. It’s where we can expand.  This is also the planet of gambling, risks, philosophy, publishing, and travel. Jupiter rules Sagittarius.

Saturn – Saturn gets a bad rap because he’s the planet of hurdles, limitations, karma, and lessons. This is where we have to learn the hard way – but master Saturn and you master your life (or your self!). It’s all about discipline, baby. Work dat Saturn and you create your own luck!  Saturn rules Capricorn.

Pluto – this is the planet of transformation and rebirth. This is a powerful planet and where the potential for deep, lasting change lies. This is how we deal with themes of power. Pluto rules Scorpio.

There are also a few asteroids we’ll be covering in a later lesson but for now…just soak up these bad boys.

Homework: get your chart drawn up and then find out what signs your planets are in (go to astrodienst.com or alabe.com to get yer chart).  Using last month’s lesson and this month’s, see if you can figure out what that might mean. For example, I have Venus in Cancer.  Venus is how we love and Cancer is sensitive, nurturing, caring, motherly, and clingy.  Which means I’m codependent.  Haha!  Kidding.  But it does mean I do like to fuss over my partner and tend to be pretty sentimental.  Can I be a cling-on?  Yup.  But only when I’m feeling ornery.

Next month we are going to look at the houses of the astrology chart.  You’ll get to see how this shizzle plays out fo’ rizzle!

Miss a lesson? They are right here in the Archives section.

images from stock photography and taoxproductions