Tarot by the Mouthful – Eight of Pentacles

This week: Eight of Pentacles Eight of Pentacles – apprenticeship, learning a trade. The Eight of Pentacles can also symbolize getting lost in a task.  Have you ever been working on something so interesting that you lose your sense of time? That’s Eight of Pentacles! This card also indicate rewards for a job well done as well as quality work.  When you’re doing your very best, the reward is in the work.

A question I often ask a chef when I interview them for my Chef Talk with Kyle Cherek series, is “when did you know you where a chef?”

Sometimes I put it this way: “It seems often there are cooks who want to chefs but are not ready, and then there are often cooks who have attained the skills, discipline and acumen to be a chef, but only call themselves by that title when someone us, above them in their apprenticeship notices them. Which one where you?”

It’s an interesting paradox, to want something so badly, but not be ready for it, or, to be well beyond ready for it. The doorway into both seems to be losing yourself in the work. The great chef Jacques Pepin talks about this in his biography The Apprentice, My Life in the Kitchen. It is a great read and one that anybody interested in food and 20th century culinary history should read.

The true apprenticeship of cook to chef, that must be traveled by everyone who earns that title, has always been something I deeply respect. It can’t be faked, bought, or borrowed. That is the energy of the Eight of Pentacles. That daily striving, to build up a body of work at any endeavor. However it is more than that. One is shaped by the work, and if their heart is true and talent uncorrupted, they may in fact shape the work as well.

One of my favorite interpretations of the Eight of Pentacles is “quality work.”  The figure in the card is bent over the Pentacle with his hammer, pounding away, while lining up others, all perfectly produced.

In cooking, quality is important.  A good meal can be made from inferior ingredients if the chef behind the food is adept.

But sometimes…quality extends beyond just the talent of the cook.

Here in Wisconsin, it’s cream puff season. Our State Fair is known for theirs. But I’m not down with fairs and the bummer summer heat.  I’ll take a pass.

But since I’ve been having a hankering for a good cream puff, I started to dig around to find one.  My daughter mentioned that samples were being handed out at the local grocer.  I went in to check this out. They sure did have them!  Big and fluffy, filled with mounds of fresh cream…but on closer inspection, the ingredients looked a little too chemical for my tastes.  I put it back on the shelf.  Sorry guys – but cream puffs shouldn’t have hard-to-pronounce stuff in it.

Next, I’m off to the local boulangerie only to discover they don’t make ‘em any more. What the hell?!  Now I’m getting pissy over here.

I started to wax nostalgically about mom’s cream puffs.  These were the stuff of sugar lover’s dreams: the crisp puff, the fresh whipped cream, the gentle dusting of powdered sugar.  Oh, how I loved it when she made those!

One time, she made a batch with a special chocolate whipped cream, which was probably the best thing I ever put in my mouth.  (Sadly, I was the only chocolate fiend in the house so that never happened again.)

I confess, that there’s a problem when you grow up with a baker who makes wonderful cream puffs: none compare.

Frankly, every time I eat one from a bakery or grocery store, I swear I can taste chemicals. Or find something wrong with it.  It’s never the same as mom’s.

So what’s a girl to do? I want quality.  I don’t want to go to the fair (truth be told: I’m suspicious about their mass produced puffs anyways). Also: I don’t have the time to go all around town to find someone who has the care and talent to make an acceptable one.

It’s time to make my own.

Which meant digging out one of mom’s vintage cookbooks!  I happen to have the one she used for her famous cream puffs.  I grabbed that tattered old book from the shelf and turned to the appropriate section only to find…someone tore out the entire section on cream puffs – including the recipe for that decadent chocolate whipped cream filling.  ACK!

Who does such blasphemy?!

And what the hell am I going to do now?

Here’s what I did do:

I searched online and found a copy of the book (Mary Meade’s Country Cookbook if you need to know) and ordered it.  It’s due to deliver today (Edited to add: it arrived at noon today!  See pic below).  I also searched online to find the recipe and managed to discover one from an old newspaper clipping. It’s kind of jumbled with a bunch of other stuff but I got the gist so at least I know what ingredients I need.

I’m heading to the grocery store (with the second-rate chemical laden ones) and will gather my ingredients (organic – I’m looking for complete quality, folks).

Then…I’ll anxiously await that cookbook – and get to baking!

Like that figure in the Eight of Pentacles, I am focused.  I will not rest until I produce the perfect, delicate, wickedly-good cream puff.

I will post my results here later tonight.  Will I be able to reproduce mom’s puffs as I remember them?  Will these really be better than a damn State fair mass-produced puff? Update 8/7/16 at 11:21PM: The finished batch – perfect!  With homemade whipped cream and lightly sifted powder sugar just like mom used to do – PERFECTION. 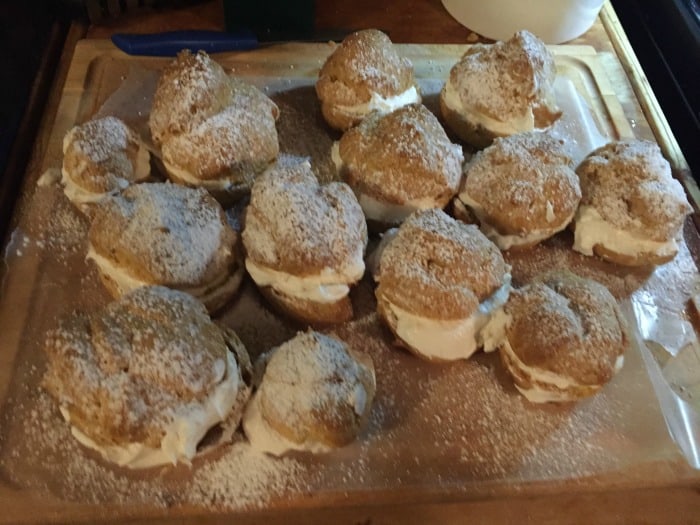