Tarot by the Mouthful – Page of Cups

This week: Page of Cups 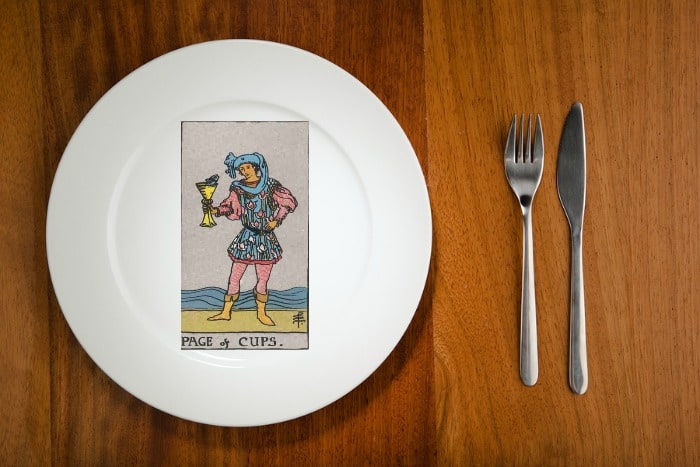 Page of Cups: Pages represent messages and new beginnings. In the Cups suit, that translates as a love message or new romantic possibility. Infatuation. Creative beginnings. Pages can also symbolize young people or children.  The Page of Cups would be a sensitive, idealistic, and much loved child.

Kyle is busy gearing up for another season of Wisconsin Foodie – so it’s all me! Theresa – A Tale of Romance and Fish

The Page of Cups can symbolize a budding romance or infatuation.  The figure holds out his cup in the most earnest way as if to say “here, take my heart”…or my fish. And so begins my tale.

“We’re going for sushi” he announced.

“Yup. And seaweed. And you’re going to like it.”  It sounded nasty to me.  The only fish I had at that point in my young life was fried.  As in a typical Wisconsin fish fry. So raw? I couldn’t imagine it.

It just sounded…wrong. But the guy I was with had long, dark curly hair and I’m a sucker for that.  So on we went.

As we stepped into the restaurant, I didn’t know what to expect. I was surprised that it didn’t reek of fish.  It was dimly lit, clean, and dotted with Japanese art.  Behind the sushi bar, the chefs were concentrating deeply and busily chopping away, arranging the fish into little landscapes.  They barely looked up from their work. They were into it.

I was getting curious as I watched teeny plates arriving to other tables.  It sure looked pretty.  But could all this artsy fish stuff actually be good?

My date ordered for me because I didn’t know what the hell to try.  Tuna, salmon, and yellowtail.  All “easy” to eat he assured me.

Our plate arrived filled with little tekka rolls and a variety of nigiri sushi.  I watched him deftly pick up a roll with his chopsticks and dipped it into soy sauce before popping it in his mouth, a look of bliss on his face.

I clumsily picked up my chopsticks and somehow managed to get a roll without too much trouble.  I followed suit and dipped it into my little soy sauce dish and then took a deep breath and shoveled it in.  It was salty, briny, and cool on my tongue.  A little ocean explosion in my mouth.  Wow.

Instantly hooked, I devoured that dinner and washed it down with many wee cups of sake.  As I was gobbling down the sushi, he said to me “I know you’re going to hurt me one day.”

“Why would you say that?  I’m pretty nice.”  He went into full-on Page of Cups mode and started talking about feelings or some such thing but seriously…I don’t remember any more of the conversation because I was too transfixed on the fish.  In fact, I don’t remember much more of anything from that evening because once we left the restaurant, I was determined to go back again alone to see if I really did like it or if it was the sake.  I had a one-track sushi mind.  And it did not include that long haired fella.  Truth be told – the food was more exciting to me than him.

Days later, I went back alone and ate in peace without all that romantic jazz.  And yup, I was in love. With the sushi, not the guy.

So I kept the sushi habit and dumped him two weeks later.  And I lived happily ever after.

When I need to get my sushi fix but am too busy to head to a restaurant, I use this simple recipe:

Cook 1 cup of sushi rice according to package directions (I use a rice cooker).  Turn the rice into a wooden bowl.  Mix 1/4 c. rice wine vinegar, 1 tsp. mirin, 1/2 T. soy sauce.  Pour over the rice and stir, while fanning the rice.

Top each dish with:

A slice of lemon