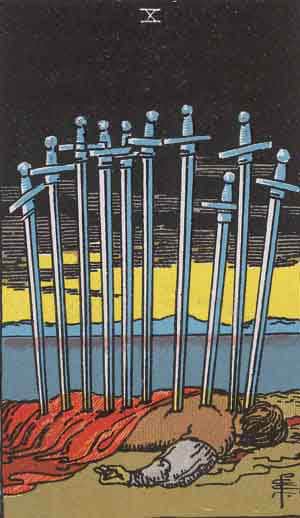 General meaning:  Stick a fork in it, it’s done.  The complete and utter ending, with a side order of pain.  It’s all over now.  Singing that swan song. Accept that things are done and move on.  Ruination at the hands of another.  Failure. The expiration date arrives. Enemies.  Backstabbing, triflin’ haters. Hitting rock bottom. Misfortune. Relapse.  Light at the end of a tunnel of hurt. Physically, this card can indicate back surgery or back pain.

Reversed:  Healing of an old wound.  Recuperation from surgery or illness.  The fresh start after a period of pain.  The promise of a new day.  Rebooting.  Recovery.  Forgiving a traitor.  Being the bigger man.  Turn the other cheek.  Picking yourself up after an epic failure and finding the courage to start over.  Seeking redemption.  It ain’t over til it’s over.

Affirmation: I am willing to release the past and start again.

Theme song:  “When The Party’s Over” by Billie Elish

Journaling prompt: Think about a time when you tasted defeat.  How did you cope? What did you learn from the experience?  How did you recover and move on?  Journal that heavy stuff, dawg.