Tarot Card by Card – The Tower 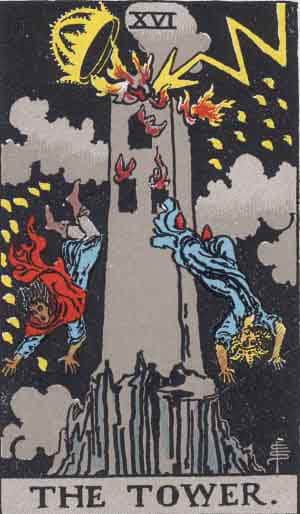 General meaning: The Tower card is a sign that things are about to change – drastically.  This is revolution time, baby. Time to tear all that shit down and start fresh.  Don’t try to resist as this is necessary.  The ground is being razed to prepare for a new foundation.  This card can sometimes indicate violence or a hostile takeover so pay attention to where it shows up in a reading.  Everything is about to shift and when it is all done and the dust settles, peace and enlightenment comes.  Major crown chakra action.

Reversed:  The calm before the storm.  A disaster averted.  The energy becomes less intense – more like a small tremor rather than the big earthquake.  Clinging to the realm (Thanks Game of Thrones! Ha!).  If you are holding on, make sure that your reason for doing so is worth it.  Fear of change.  Putting a cap on it.  Chicken Little – the sky is not falling after all.  Stop stressin’, yo.

Affirmation:  I am ready to evolve.

Theme song:  ” All Along The Watchtower” by The Jimi Hendrix Experience

Journaling prompt:  What is your greatest fear?

One for the money
Two for the show
Three to get ready
For dat Tower to blow
Shizz hit da fan
Get outta the way
You’ll appreciate this shift
Later today.