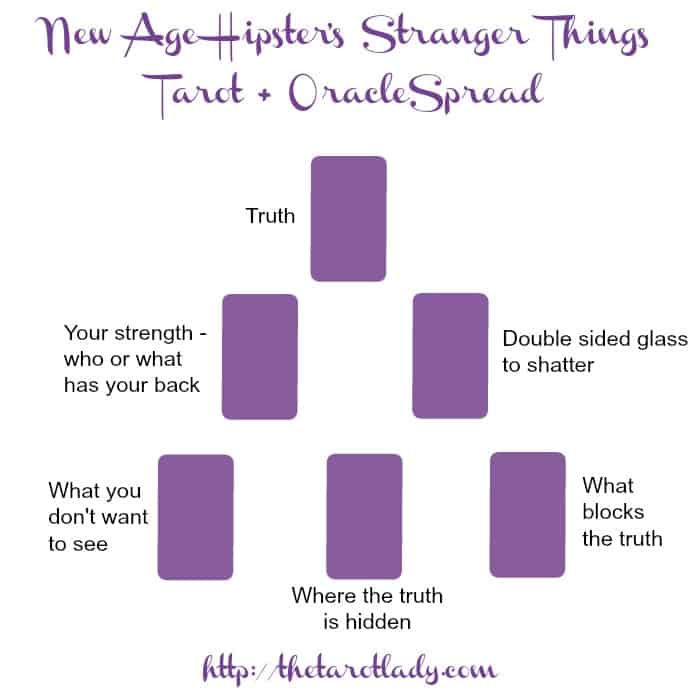 Confession: I have yet to see Netflix’s Stranger Things even though I keep hearing that I should.  Truth is, I have a lot of tv under my belt at the moment (90 Day Fiance! Married at First Sight! Bar Rescue!  Maury! Ha ha!) so I just can’t add one more thing. Plus, I’ve got work to do with an upcoming book on the way in a few short weeks.

That being said, I was totally drawn to the Stranger Things Spread over at New Age Hipster’s online hub.  Apparently, the show is all about “searching for truth” and this spread aims to help you do just that.

Let’s test this out! 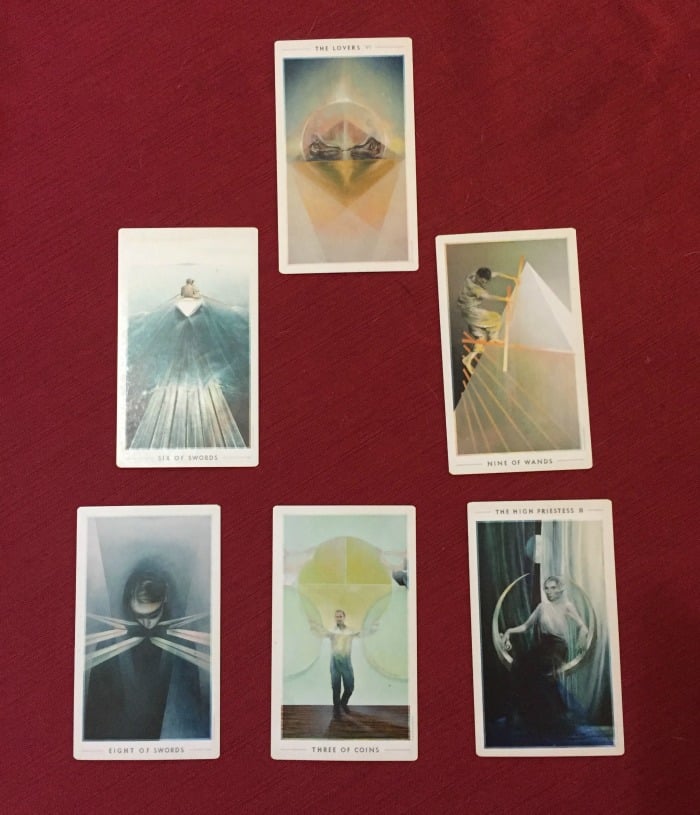 Vix says “This spread is not for the faint of heart. Serious truth seekers only!”  Sounds like my kinda thang since I’m all about truth ‘n stuff.

Let’s look at the positions first:

What you don’t want to see

Where the truth is hidden

What blocks the truth

Your strength – who or what has your back

What you don’t want to see: Eight of Swords

Where the truth is hidden: Three of Coins

What blocks the truth: The High Priestess

Your strength – who or what has your back: Six of Swords

The truth: The Lovers

What you don’t want to see: Eight of Swords – there is something here about being on the outside, being isolated.  What I may not realize is that I’m creating some sort of self-imprisonment, perhaps by keeping myself removed from certain situations.

Where the truth is hidden: Three of Coins – in my partnerships.  Now notice the difference here between the Eight of Swords and the Three of Coins – one shows a figure all alone while the other shows three people working together to create something beautiful.  Could this be about boundaries and relationships?  Perhaps.

What blocks the truth: The High Priestess – The High Priestess adores working in secret.  She likes her privacy and wants to protect her secrets.  Ahhh….we’re getting somewhere here.  My need for privacy and boundaries keeps me safe but perhaps too safe.  Shit…looks like the theme here is that I have a major trust issue! BINGO!

Your strength – who or what has your back: Six of Swords – In hard times, there are a few safe people I can trust – people that I know I can count on.  Even though I’ve had my share of disappointments, I’ve always had help to get through it.  Yep, some peeps do have my back. (You guys know who you are!)

Double sided glass to shatter: Nine of Wands – That bloody paranoia I have.  The paranoia that is borne through previous betrayals.  Because of hurt that I’ve experienced in the past, I’m reluctant to let people in.  I guard my self + my work like a junkyard dog!  DAMN GIRL.

The truth: The Lovers – the truth is that relationships require risk, which means being open even though the risk of being hurt is there.  The serpent in the background is a reminder that snakes will always lurk around but why let that spoil the good relationships I have…or might encounter?  You can have boundaries but don’t need to shut everyone out.  BAM!

In short, I have some serious trust issues – which may be unintentionally isolating me.  Although I do like being a lone wolf, it might be creating a sense of reclusiveness…or confinement. Time to rethink some of those boundaries.  Or not.  Because maybe the real truth is that this ole Moon in Scorpio kinda digs that little bit of exile.  Heh heh….

This was an interesting spread and I’m still finding layers of insight ‘n truth to explore here.  I think this is one to write in the tarot journal and revisit again…and again. Who knows? Maybe more truths will be revealed?  Or perhaps the truth will change?  All in all, I think this is a good one to play around with.

If you’re searching for your own personal truth, you might find this spread intriguing.

I hope you enjoyed this edition of Tarot Spread Test Drive. I’ll be taking the tarot wheel and hittin’ the road with a new spread next month. If you want to ride along with me, keep an eye on my blog. Happy tarot trails!

images from The Fountain Tarot