Like most people, the end of the year is a time of reflection for me. As 2017 was winding down, I began looking for a good Christmas tarot spread, especially since I’ve been having a bit of controversy with the family over my decision to opt-out of the holidays. The whole notion of an obligatory day of hanging out in the sticks just didn’t appeal to me. Plus, I’ve been busting my ass all year long. I wanted – and needed time for myself.  I made this same decision last year and got away with it – but this year, all hell broke loose. I was called “selfish” and a million guilt trips were laid.

They didn’t understand that the one gift I wanted more than anything was the gift of quiet time without obligations or forced traditions. What is wrong with that?

Enter Sasha Graham’s Opening a Gift Spread. You can find this spread in her book 365 Tarot Spreads: Revealing The Magic in Each Day or you can check out this post, which has the instructions nicely laid out.

The spread is simple. You shuffle the deck, then remove the top five cards without looking at them. Next, you put these cards around the remaining deck, like you’re framing a little tarot house. This is the “wrapping” and the remaining deck is your “gift.”

Then, turn over the five cards, one by one and meditate on each card’s message. Finally, turn over the top card on the deck – that’s your gift. This symbolizes the gift for the upcoming year.

Here are the cards I drew: 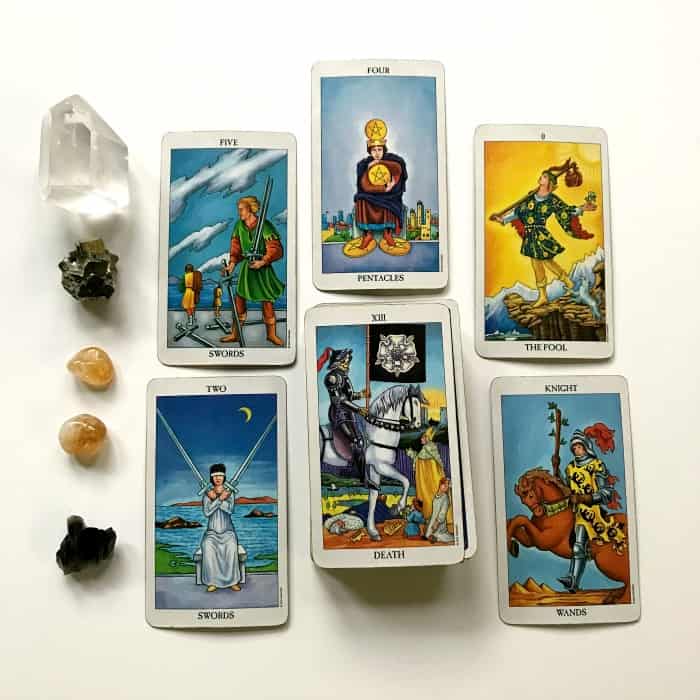 My question was this upcoming holiday and what this may mean for my new year:

Two of Swords – I’ve given myself some much needed time off this holiday season. Although an introvert by nature, I’ve been in extrovert mode all year long with my book tour. Now, I’m ready to chill and go within. Some may see this card as isolation while I see it as the necessary time out to rebalance myself.

Five of Swords – this accurately reflects the people around me who are not very happy with me at this moment. They see this as hurtful and are acting as if I’ve “stolen” their holiday joy. I’ve disrupted their routine, which has created anger and pain. This was not my mission. There is another lesson in here: learning how to set boundaries. That is not easy to do when you have people in your life who want to control the narrative through manipulative behavior. By laying on a guilt trip and accusing me of being a bitch, perhaps they assumed I’d fall in line and go back to behaving how they want. This situation symbolizes the difficulty in making a change and the opposition that must be dealt with when doing so. Although I have tried to explain myself, it looks like it will do no good. It’s time for me to move on from this instead of hanging around on some imaginary battlefield.

Four of Pentacles – This card shows I will need to command my space and protect my energy. It won’t be easy but it can be done. Ironically, this is a card that is often connected to selfishness. Which is exactly what I’m being accused of! My family of origin story has always been about saying yes, even when I wanted to say no. Wanting to stray from the herd was always met with manipulation – both aggressive and passive-aggressive. My role was the designated “caretaker” and goddamn it, I’m sick of it. If they see me as greedy with my time, so be it.

The Fool – what is the underlying goal in my life? Freedom. It’s one of the reasons why I am self-employed. I want the freedom to do what I want, which is why I’m not a good employee. But this freedom extends far beyond just that. I like freedom in every aspect of my world. Which is why this freedom to take the holiday off is so important to me. Obligatory traditions and relationships bog me down. I need to be able to do my thing without anyone clipping my wings or making me feel bad for it. It’s time to start fresh and put this old baggage behind me once and for all. I am ready to live my life on my terms.

Knight of Wands – the Knight of Wands has a sense of adventure but also the freedom to go where he wants without any hindrance. I always see this guy as someone who lives by his own code – and seeks to live passionately. My decision is just that: it’s not that my opt-ing out is meant as a slight. I just want to live by my own rules, without feeling constrained by a tradition that I don’t relate to. I want to do my thing – and let others do theirs.

Death – looks like 2018 will be a big time transformation for me. I’m not surprised to see this card. I have big plans in the works. New things on the horizon. The old way is coming to a close and there is a new way ahead. Tearing down the traditions that no longer light me up isn’t meant to be a blow to anything or anyone. I am simply freeing myself from the things that don’t align with the new life I am creating. Ahead, I see light, freedom, and big possibilities. Ain’t got no time for worrying about petty shit or what other people think. It’s time to transform. 2017 was powerful for me but 2018 will allow me to redefine how I live. The family of origin stuff? Done. I’m my own woman now. Period. That’s a huge gift indeed.

This was a powerful reading – and one that has many more layers underneath this sample journaling. No doubt I will pull my tarot journal out and contemplate this further over a glass of wine on the new year’s eve.

Give yourself the gift of 365 Tarot Spreads this holiday. Pull this spread out and see what you discover. (Psst learn more about Sasha here – she’s amazing.)