Why that “bad” tarot reading (or the one that didn’t tell you what you wanted to hear) may be a blessing. 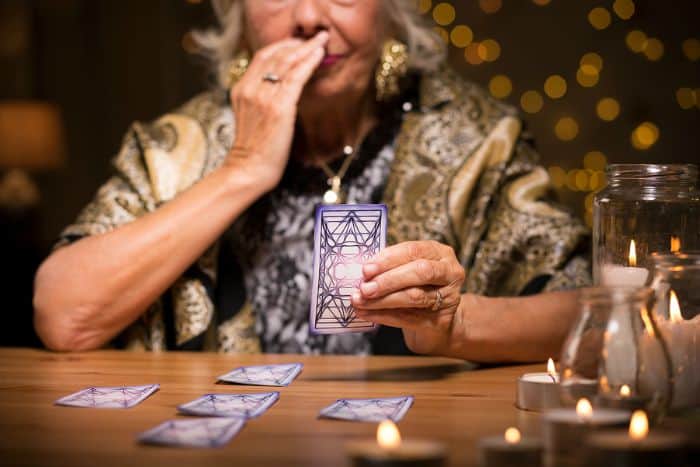 You got just got a tarot reading and the cards clearly showed an unfavorable outcome.  (Sorry, but you can’t really pretty up the Ten of Swords.) Whether that reading was ominous or not what you wanted to hear, you’re now freaking out.

You may be worried…or looking for a different reader who might give you a happy-happy-joy-joy glittery unicorn outlook.

Before you flip out or flip more cards, take a big breath and hear this:

A “bad” tarot reading doesn’t always have to become a prophecy nor does it need to be swept under the glitter-fairy-dust carpet.  It can be a blessing.

It may point out something that you are not seeing.

It may draw attention to something you are refusing to accept. (Never underestimate the power of denial.)

It may be the warning bell that helps you to make a conscious change.

It may be showing you an alternate route that might be better suited for you.

It may confirm something that you are already feeling but hoping isn’t true.

A negative outcome may help you to take the rose colored glasses off and get a reality check.  Which may sting but it may also help you to make better decisions rather than wasting your time on something or someone that won’t work.

It gives you a chance to think, to percolate, to contemplate before taking action.  This is empowering.

An example: a woman got a reading about a relationship. The cards were negative and suggested she explore other options.  She got angry because this is not what she wanted to hear.  Months later, she writes back and apologizes.  She was involved with a married man and hoping he would leave his wife for her.  Other readers told her to hang in there.  I was the only one who didn’t confirm that fairytale.  The man in question stayed with his wife and broke things off with her.   She mentioned that she had red flags all along but wanted to believe what she wanted to believe – and wasted a whole lot of time with this cad in the process.  (PS she thanked me for the reading and said she probably won’t get another reading with me because she’s afraid of what I might say.)

Another example: A young man sat in my office, watching me turn over the cards.  Not one good card came up.  Gulp.  I told him that he needed to make some major life changes or he might end up in prison.  He seemed unimpressed and left.  I heard back that he didn’t like the reading and thought I was a bummer.  A few months later, his girlfriend called me in hysterics.  He was arrested for dealing drugs.  As he was being led away in handcuffs, he said to her “I wished I would have listened to that fortune teller.”  (You can’t make this stuff up!) This guy could have avoided a whole world of hurt and pain if he would have looked at those negative cards and perhaps reflected on the life choices he was making.  As I say: the cards tell a story but you write the ending.  He could have changed course at any time and would have had very different outcome.

One more example: years ago, I got a reading from a guy who warned me about my husband’s business partner.  I balked at the reading. We were good friends with this guy and couldn’t imagine him doing anything dishonest.  But he betrayed us a few months later in the most cowardly way possible.  When the shit hit the fan, I thought about that tarot warning more than once!  It pointed out something I could not see because my “friend glasses” were in the way.  (Yes, even those of us who should know better do the same thing when we get an outcome we don’t like!  Ha!)

So let’s say you get a “bad” reading or you maybe you didn’t get a rose-colored outcome that you wanted to hear.  if the cards look dire or the reader isn’t giving you the high five, pause.

Sit with it for a bit and see what comes to the surface.  (If nothing resonates, feel free to take a pass!  It’s your life and yes, readers can be wrong. We are human, yo.)

Another smart move would be a follow up reading with strategy-fueled questions such as “what decisions could I make to change this outcome” or “what can I learn from this situation” or “what can I do to heal this/fix this/move on….” or “what is holding back from making better decisions”.

Strategic or advice-oriented questions can shed light on your role in the situation as well as things you can do to move in a better, healthier direction.

Your future is constantly evolving and so are you.  A tarot reading, good or bad, doesn’t mean you get to be a passive participant in your destiny.  Let good readings inspire you but let those so-called ‘bad’ ones be a helpful guide too.

PS I highly recommend these two tarot books by Gail Fairfield which both focus on working with tarot to make choices that are for our highest good:

Choice Centered Relating and the Tarot