Breaking Down the Celtic Cross – Lesson 16: The Storyboard Tarotcise

In the next few posts in this series, we’re going to look at a few techniques that will give you new ways of looking at the Celtic Cross spread. I call these little exercises “tarotcises.”

The first technique is what I call the “Storyboard Method.”  What is a storyboard? The dictionary defines it as “a sequence of drawings, typically with some directions and dialogue, representing the shots planned for a movie or television production.”

In this tarotcise, we’re deconstructing the Celtic Cross by laying it out horizontally in order, from the first card to the last one chosen.

When you lay out the cards in this fashion, you can start to see a story unfolding. It gives you another way of looking at the Celtic Cross – and may lead to new insights.

Here’s what to do:

First, do a regular Celtic Cross reading. Then, take your Celtic Cross spread and lay the cards out in a straight line from the first card pulled (present moment) to the last one (the likely outcome).

Now, read the cards from left to right as if you are telling a story. Ignore the “defined positions” and don’t worry about interpreting. Just tell a story. What might you glean from looking at them this way? What story is being told?

Let’s try this out! Using the reading from the previous lessons. We’ve decided that our querent is ready to move on after her divorce – and wants to know what’s in store for love. 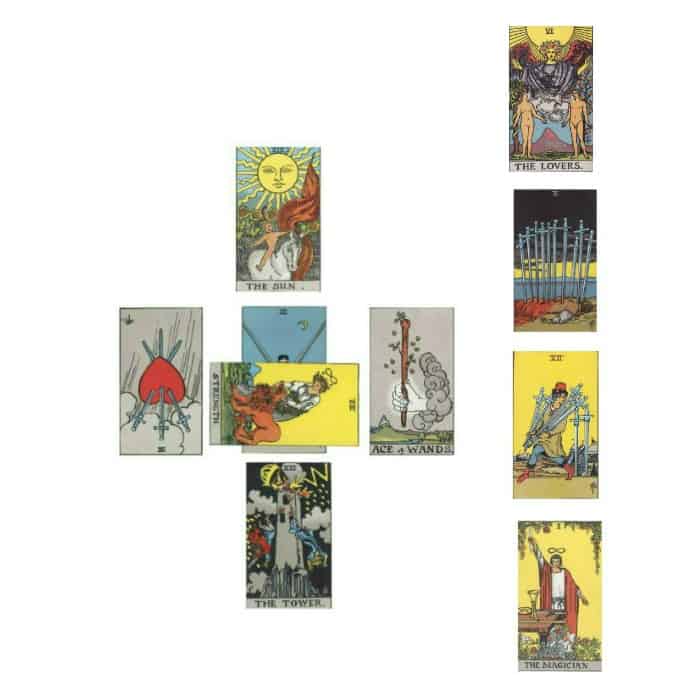 Now let’s lay it out horizontally:

If we scan the cards, we see it starts out with the Two of Swords and ends up with The Lovers. Due to the nature of the question, we see that the story ends with love – but not without some ups and downs before it comes together for the querent.

The story: We begin with a woman sitting alone (Two of Swords). She’s been exiled, away from others. Perhaps this has been by choice. Maybe not. Somehow, she gathered the courage (Strength) to leave her prison (The Tower). It required her to take a risk. Once she was out, she discovered that it wasn’t so scary after all (Three of Swords reversed). She began a new life (The Sun) and began to happily explore the world. Life was sunny again. One day, an important offer came her way (Ace of Wands). This offer gave her power (The Magician). Although she was now in the best position of her life, she never felt entirely comfortable. In some way, she felt like an imposter (Seven of Swords), which made her anxious. She was worried that someone might find out that she was a fraud and take her power away. This was something that had happened to her before (Ten of Swords). Which is why she was in exile in the first place. It was time to let go of the old story. Because the future didn’t turn out that way. This time, things were different. Instead of exile, she found her people (The Lovers). Love ruled her world from that day forward.

This little story shows lessons about personal power and healing the past in order to move forward. Our heroine needed to face her fears and banish them. Instead of carrying her old story of betrayal forward, she needed to create a new one. Which means for the querent, her foray into the dating world must be with total openness. She mustn’t let the old situation (her divorce) color her future experiences. The advice I would be giving her: even though you’ve had a bad divorce, don’t bring those fears with you. This is a new game and you’re more powerful now than before. Ahead, the promise of love awaits.

Once again, grab your tarot journal and your favorite deck.

Lay out a Celtic Cross and interpret it. Then, lay it out in the Storyboard formation and let the cards tell a story. What does that add to your original reading?

Next month, we’re going to deconstruct the reading again. Yup – this isn’t the only tarotcise I’ve got up my sleeve. Until then, keep shuffling!