Breaking Down the Celtic Cross – Lesson 2: The mini cross 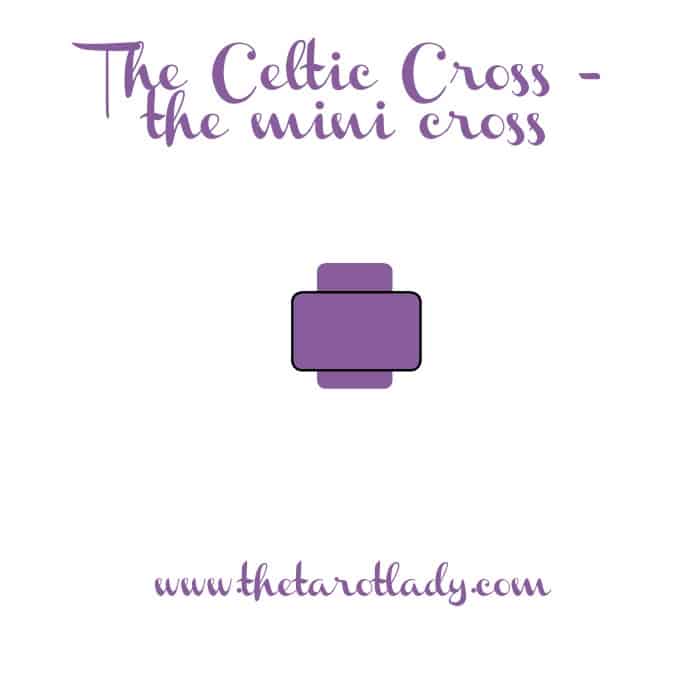 In this lesson, we’re going to talk about the “mini-cross” or the little cross in the middle of the Celtic Cross.

The first two cards are laid out in a cross formation.  The first card symbolizes the present moment or what is influencing the querent or the situation. The second card is “what crosses you” or the obstacles or opposing forces the querent may be facing.

I always read the second card right side up, no matter how it lands.

Pay attention to the energy between the two cards. Are they compatible? Do they support each other – or is there a contradiction present? For example, are they both positive in nature or is one negative?  What might two negative cards tell you about the situation? How about two positives? What about if the first card is negative and the crossing card is a positive?  These are the questions to ponder when considering the mini cross.

Here are a few examples: 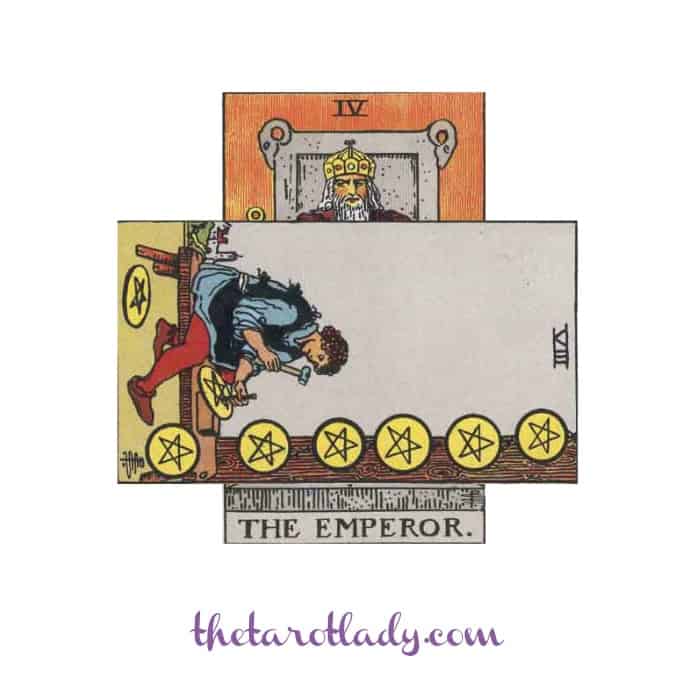 Let’s say the first card is the Emperor and the card that crosses it is the Eight of Pentacles.  The Emperor symbolizes hard work, discipline and security. The Eight of Pentacles represents training and getting lost in the work at hand. This would indicate that the querent is working hard on his or her career or goals, remaining focused and making great progress. 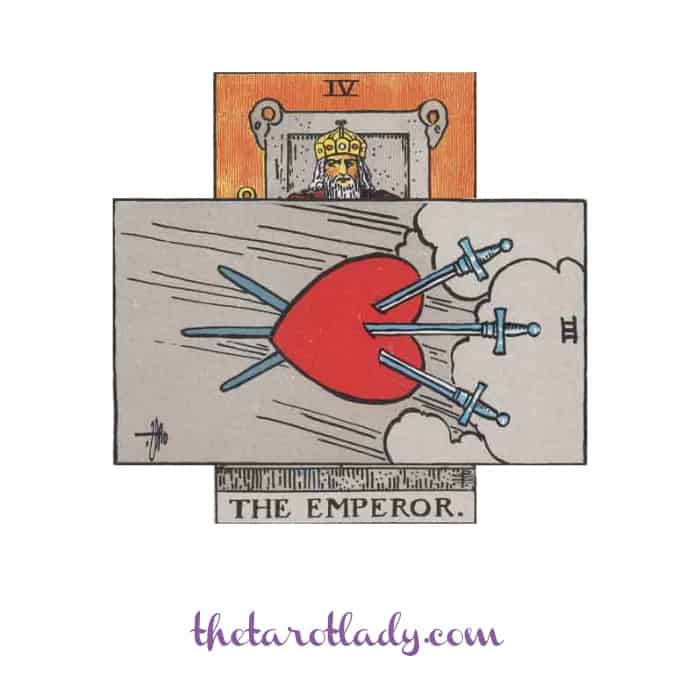 But what about if the crossing card was the Three of Swords?  This could symbolize a structure that is breaking down, such as a marriage that might be on the rocks.  Or it could suggest that the goals are disrupted through some sort of loss or treachery.  The stability is threatened and the querent may be under a great deal of stress.

If we reverse The Emperor with the Three of Swords, it might suggest that a loss will be overcome through hard work. Or it could symbolize a marriage that is falling apart due to a controlling partner (you’ll need to consider the context of the question as well as the other cards).  See how this works?

If the first card was the Death and the crossing card was Judgement, this could symbolize an ending that the querent is embracing.

But if the crossing card was the Seven of Wands, this would show resistance to an ending or someone who is trying to force an ending and facing opposition from others.

See how this works?

What if the crossing card were a Court card?  This could symbolize a person that may be influencing the situation or creating a problem for the querent. 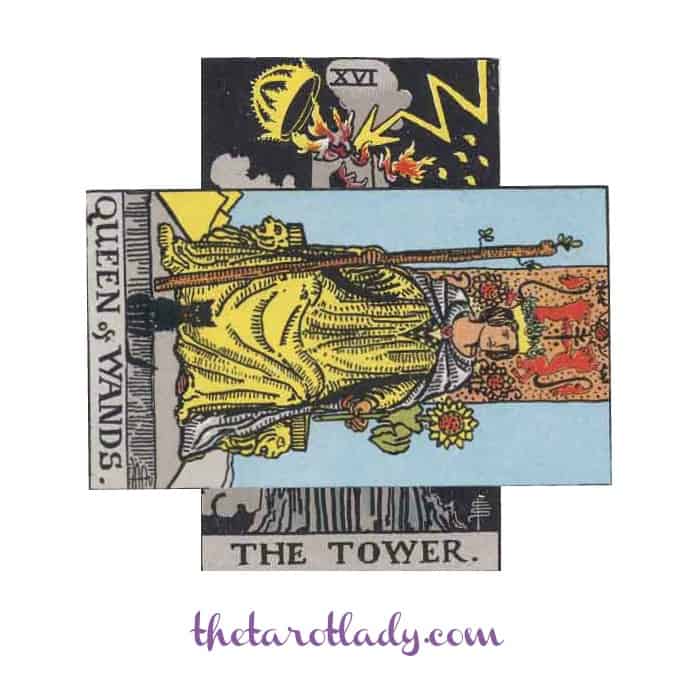 Example: the first card is The Tower and the crossing card is the Queen of Wands – there may be a swift and difficult change and a fiery woman may be adding fuel to the situation – or hindering the progress.

Two Court cards would show more than one person being prominent in the affairs of the querent. 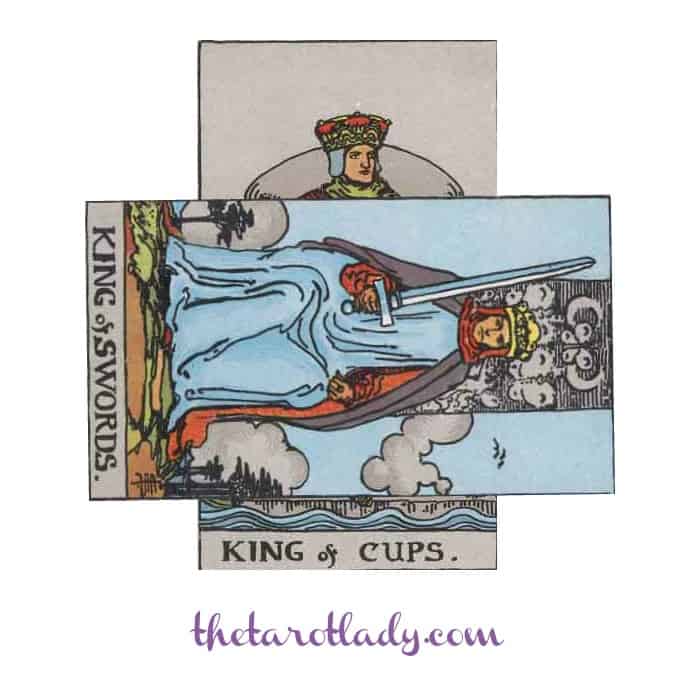 Example: in a woman’s reading, two Kings might symbolize that she is torn between two men. Or this could represent an important business meeting that may be on the querent’s mind.

Other things to pay attention to: are they both Majors? If so, this could be a period of significance to the querent. A bigger picture may be emerging.  Both minors? Day to day grind stuff may be the focus at the moment – and this would imply that the querent has control over what is happening now.

If you read with elemental dignities, look to see if the elements are compatible – or not. Here is a tutorial series on elemental dignities from Tarot Elements that may give you more insight if you’d like to work with them (I don’t use them).

Get your tarot journal and your favorite deck.  Lay out a few mini-crosses and study the energy between the cards.  Are they compatible…or not?  What might the clues might you be picking up if this was a general outlook reading?  If you are asking a specific question, what might these two cards be telling you about the present moment?  Do a whole bunch and journal your findings!