Breaking Down the Celtic Cross – Lesson 5: The possible outcome position

At the top of the mini-cross is position 5, the “possible” outcome.  This card symbolizes situations that may be on the horizon, what may be coming into being or possibilities.  In some books, this position is “what crowns you.”

This card is the potential.

I often interpret this card as where you will most likely end up based on the time of the reading.  Which means if a card like the Three of Swords sits up there, the querent may be heading for a loss or heartbreak.  I can look back at the previous two cards to see what is creating the conditions for that possibility. If the Three of Cups was the past and the Devil reversed was the recent past, this would indicate the querent may have met someone new, began an illicit affair and now may be contemplating leaving their marriage.  Or this could be interpreted as a relationship that started out fun but went seriously wrong – and is most likely coming to an end.

Remember to look at those past cards because they give clues as to how the story is unfolding and what lead to this “possible outcome.”

You may find yourself asking: what about that outcome card then?  If this shows the possibilities, why bother with an outcome card?

In my opinion, these two reinforce each other and I often interpret them as a triad with the card in position 6.  But we’re skipping ahead here.  As we continue on with these lessons, I’ll be showing you many ways to pair the cards as well as what to do when we see contradictions.  For now, let’s just work with this card as a stand alone.

In our previous lesson on the recent past position, we have the Two of Swords crossed by Strength and the Tower in the Past position and the Three of Swords reversed in the Recent Past.  What might happen if we put the Sun in the Possible Outcome position? 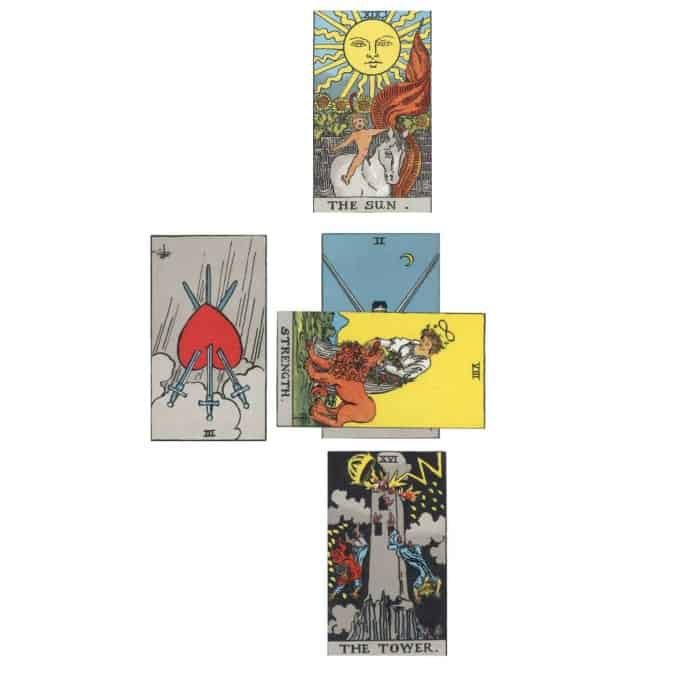 That might show that the querent has gone through a very difficult change in their life, one that required a great deal of healing and inner work. They are now getting on top of the challenge and moving towards a happier time.  This shows the querent is stronger and the choices they are making will be leading to a better, more successful chapter.  A rebirth even.

What about if we put a Court Card here?  Let’s say the King of Pentacles. 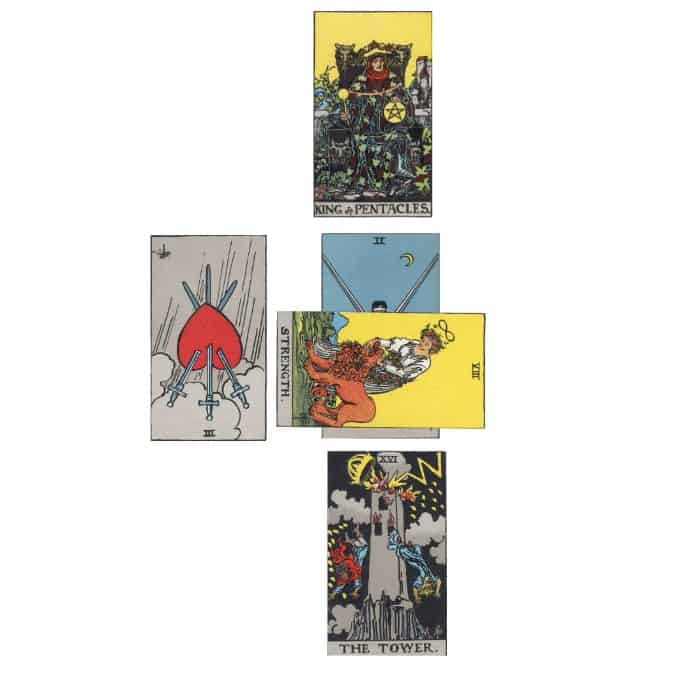 We might interpret this as the client becoming the King of Pentacles after an ordeal: more grounded, secure.  The change may have matured them and given them a sense of what is really important.  Or this could indicate that there is a helpful figure coming into their life, someone who will have a favorable and steadying impact on the querent’s life.

Read the Past, Recent Past, and the Possible Outcome as a little story.   What might these three cards show unfolding in the querent’s life?

Pay attention to the majorities here in those three positions. Are they the same suit? If so, that may be telling you that this particular area of the querent’s life has been needing the most attention for some time. For example, if they are all Cups suit, this would show a focus on the emotional life that is beginning to “crown” or come to an important conclusion.  If these were all Major Arcana, we’d see someone who is undergoing an important, life-altering change. All Courts might show many people impacting the querent’s situation – which will then make the mini-cross and other positions critical to see exactly how and what they are impacting.

Grab your tarot journal and your favorite deck.  Lay out a spread with just the mini-cross, past, recent past and the possible outcome.  What story is unfolding? If you are asking a specific question, what might this combination be telling you about the future?  Now try it with a different card and contemplate how that may change the outcome.

I also recommend going through the whole deck this way, testing out each card’s impact in this position.  How might a different card in the possible outcome shape the reading? What hints for the future might you find here? Journal it.