Breaking Down the Celtic Cross – Lesson 6: The near future position

The Near Future position

The near future lies to the right of the mini-cross.  The card in this position symbolizes something that is coming into being soon. Depending on the card, it could be an event, a challenge to be overcome, or a person who may influence the final outcome.

Whatever lands in this position may have an affect on the outcome so it’s important to look at this card and then the final one (in a later lesson) to see exactly what that influence might be.  Whether that affect is lasting, passing, or altering will depend on both this card and the outcome.

Let me give you a few examples to consider.

If both the near future and final outcomes are Major Arcana, this could be symbolizing a life altering series of events coming for the querent.

If, however the near future is a Major and the outcome is a minor, that could be indicating a big change being assimilated.

A negative card such as the Eight of Swords in the near future followed by a positive card such as The Sun might indicate the querent has to go through a difficult period but they’ll be fine in the long run.  If we reversed those cards, we might see a happy situation that turns out to be confining.

Court cards in the near future might indicate a person coming into the picture who may play an important role in the querent’s future.

Pay attention to the near future because it gives information about events or people that may be influential to the ultimate outcome.

Using our sample reading from the previous lesson, let’s add some cards: 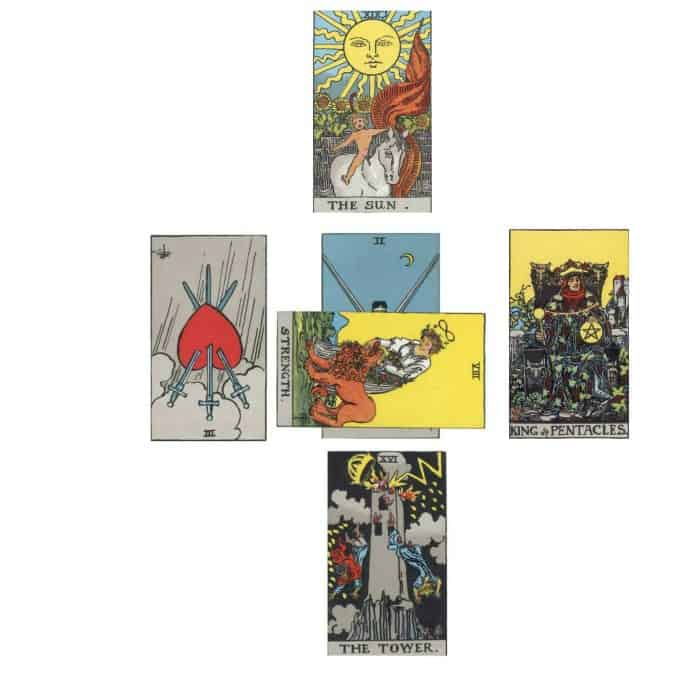 When you look at the previous cards, we can see that the querent has gone through a life altering event, perhaps a divorce.  They have been in the process of healing and are now getting back on top of things. The Sun shows the potential for happiness coming into the querent’s future.  And the presence of the King of Pentacles shows that it may be coming through a person who has the qualities of the King of Pentacles – calm, earthy, reliable.  A new partner?  Or just a helper who has a passing influence?  You’ll have to look to the final outcome to determine that.

Let’s try another card – the Ace of Pentacles: 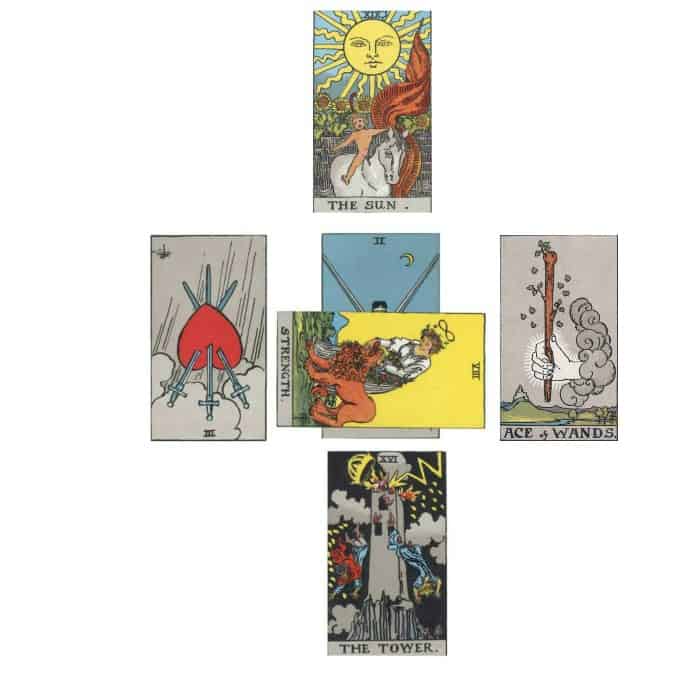 Because this card follows the Sun, I would interpret it as a rebirth.  A total fresh start. If the querent was asking about their career, then this combination could show someone who left an unsatisfying career abruptly to figure out what they really wanted to do with their life. The Sun and Ace of Wands might indicate that they will discover their true passion and begin a career that excites them.

Pay attention to the cards that now surround the mini-cross.  What influences are behind and around the current situation?

Look at all the patterns forming.  Mostly Majors? The querent might be in a time of great change. Mostly Minors? This could symbolize dealing with the day-to-day stuff.  Courts? Lots of people influencing the current events.  Many reversals?  This could be a time of introspection or difficulty.  Also, seek what may be missing – that may also lend clues as to what is unfolding.  For example, no Cups in a reading about a relationship may show the absence of an emotional connection.  Think like a little detective as you study the cards.

Grab your tarot journal and your favorite deck.  Lay out a spread with the mini-cross and the other four cards.  What are they telling you about your question? What might the possible outcome and near future be promising – or pointing out?  Look at the two past positions and the two future oriented ones – do you see progress or problems?  How might the past be influencing the present and the future?  How might the present be impacting the future?  Dig around and journal about your findings.

I also recommend going through the whole deck this way, testing out each card in this position like I did with the two examples above.  How might a different card in the near future shape the reading? What might be coming soon and does it look positive or negative?  Is the near future indicating that the querent is progressing or the opposite? Journal it.