In today’s lesson, we’re going to cover a few of the major Aspect Patterns.  There are more to get to later but this brief intro will get your astro-appetite whetted.

The ones I’m focusing on are important and fairly easy to spot in a chart.  Yes, there is a little math involved (quelle horreur!) but don’t freak – once I show you how simple it is to spot them, you’ll be finding them left and right.

Psst…there’s a cheat for ya: many astrology programs will tell you straight up if a major aspect is hiding out – and they’ll show you how to find ‘em with lines ‘n stuff. See the purple arrow in the example below – the T-Squares are named! 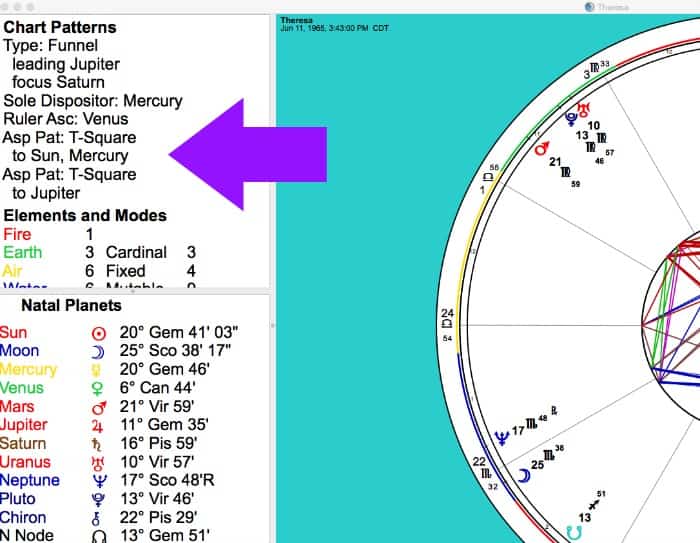 That’s cool and all that these programs do the math for you but it’s even better to be able to front these big aspects out without the help. Plus, it’s fun.  Kinda like being a little math nerd detective.

On with it (ps excuse my lame dotted lines in the examples – I’m graphically challenged!):

The T-Square is formed when two planets oppose each other (180º) and both are also making a square (90º) to one planet.  Draw in some lines connecting these planets and ta-da – you have a letter T!

You’ll often hear people bitching about having a T-Square in their astrology chart.  “Ugh…I have T-Square and that’s why life is soooo hard…..”  There is a bit of truth to this because a T-Square feels like a three-legged table: the energy is unstable and wobbly.  But here’s something to know: some of the most successful people in the world have T-Squares in their chart. That’s because a T-Square creates tension and that stress can become channeled. It stimulates drive.  When the individual finds a way to work with the energy, they become unstoppable.

The trick with the T-Square is to look where the “missing leg” of the table is.  This shows you where you need to focus your energy. It’s the “solution” to the T-Square problem. How do you find that?  Easy: the planets in a T-Square are all in the same quality (Cardinal, Mutable, Fixed).

A Cardinal T-Square loves to initiate but must find a way to be patient. They need to learn to finish what they start. A Fixed T-Square can be obstinate – which, if applied well means perseverance. If this T-Square goes in the negative direction, the individual can hold grudges or get stuck in ruts. A Mutable T-Square tends to be capricious and restless, scattering their energy to the wind.  If they learn how to lean into the energy, they can be extremely adaptable and multi-talented.

Let’s use my chart as an example.  I have a T-Square in Mutable planets.  A Virgo Mars in the 11th opposes my Saturn in Pisces in the 5th and both are squaring my Sun and Mercury in Gemini in the 8th.  The degrees are pretty tight too so this is intense.  Again, Mutable T Square people must be mindful that they do not scatter their energy with too many projects, etc. So where is the missing leg?  The last Mutable sign is Sagittarius – which lands right in my 2nd house.  That means to focus on values, resources, and creating material security.  Done and done! I call this aspect the “Big Easy” because it is alleged to bring luck and ease into the individual’s chart.  This aspect is formed by three planets, each in the same Element (Earth, Air, Fire, Water), making a triangle shape with 120º between each sign.  In other words, two planets are 120º apart and they both make a 120º angle to another one. It’s like a little planetary menage a trois. Things come easy for the individual – they have harmony, unlike the poor saps with T-Squares.

Lucky you if you have a Grand Trine! But hear this: I have known more than a few people with a Grand Trine who became lazy AF and drifted through life, expecting to get by on their charm.  If you possess this fortunate aspect, work it. Don’t squander that good energy. Ask your successful T-Square friends what they’re doing to kick so much ass.  Then do the same.

Tom Cruise has one and this man has had a pretty darn good career (hint: his Pluto, the planet of power, is in an opposition to his natal Jupiter – this creates tension and that incredible drive – plus that Mars in Taurus makes him one determined mofo): Remember our friend, the T-Square?  Imagine if he had the missing leg.  If that was the case, you’d be looking at the Grand Cross – a configuration involving four planets, all in the same quality (Cardinal, Mutable, Fixed).  This is still a tense aspect, even though that missing leg is filled in.  Sometimes these individuals seem to seek drama or a crisis. The way out? Through the middle.

Which means you kinda gotta take a bit of a Zen approach here.  For Cardinal Grand Crosses, strategic action is needed. Mutable Grand Crosses need to learn to sit still and find their root.  The Fixed Grand Cross needs to get out of their comfort zone.

Mia Farrow has a Grand Cross and we can probably agree that her life seems to have a lot of conflict and drama (extra credit: find the Grand Trine in her chart!): 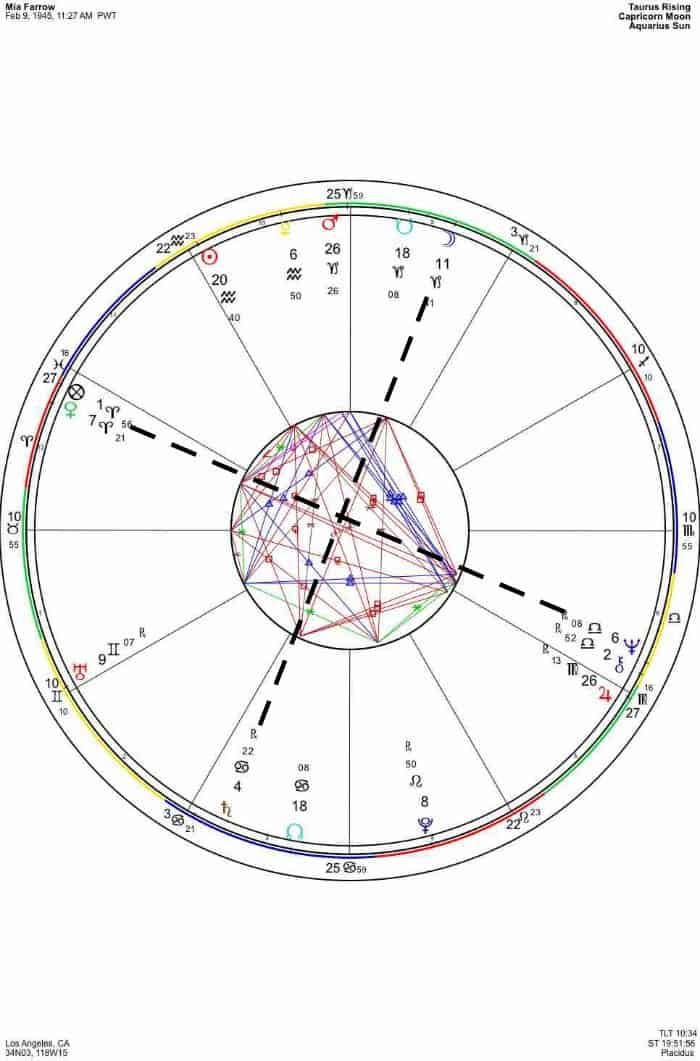 I remember when I was studying astrology back in the day and heard all about this Finger of Yod business.  It sounded so cool!  And it is! The Yod (as it’s called for short) is an aspect that is formed by two planets in a sextile with a third planet making a 150 degree angle, called a quincunx, to the other two.

What the heck is a quincunx?  A quincunx is a minor aspect that is considered to be unfavorable.  It’s like a weak square. I call it the gnat of the zodiac aspects – annoying but not that significant.  A Finger of Yod symbolizes a mission of sorts, with that third planet being the focal point of the mission.

Little did I know that my husband and both of my children have the Finger of Yod!  No wonder I always felt like they were collectively giving me the finger!  Ha ha! All three have artistic missions: husband is an artist and musician, son is a musician, and daughter is a writer.  Their “fates” were sealed early in life.

True story: my son had perfect rhythm even as an infant.  He would rock in time to any song I put on. Didn’t matter if it was Bach or The Ramones. He kept perfect time, every time. I remember watching him bop along to a song and saying out loud “he might be a drummer one day.” I wasn’t surprised when, years later, he decided to pick up the sticks. A dedicated regular practice, many lessons, and a Master’s degree later, he’s living his dream.  That little drummer boy was fated to pound those skins. (He’s also extremely psychic – look at his planets below and see which ones are involved in this Yod.) 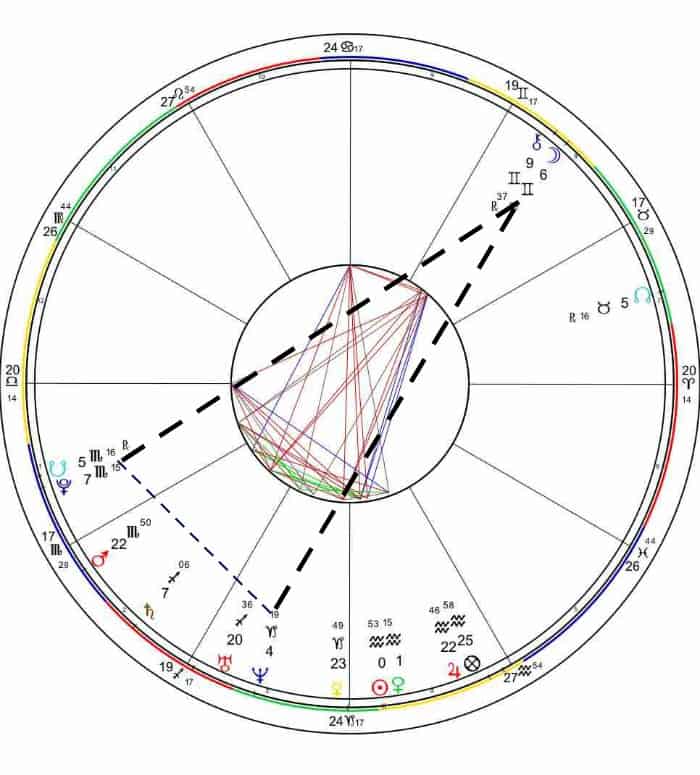 I’m going to leave you right here because this should be enough to hold you and pique your interest for a bit.  We’ll revisit Major Aspects down the road but for now, start finding these guys in charts wherever you can.

A quick cheat: if you have astrology software that points out the Aspect Patterns, study ‘em.

Homework:  Grab your chart and look to see if you have a major Aspect Pattern. (Remember: some astrology programs like Time Passages will tell you what your Aspect Pattern is – taking all the guess work outta there!)  Trace those lines with your fingers (or the pointer on your computer).  What houses are affected? Which planets?  What might you glean about yourself from studying these patterns? Where might you need to be careful – or amp up the energy? Grab random charts – friends, family, celebrities.  What Aspect Patterns can you find? What does it tell you about them? Have fun with this!

Next, let’s look at our buddy Kim K’s chart.  Can you find an Aspect Pattern in her chart?  What does this say about her?

Next month, we’re looking at the Hemispheres! Upper, lower, left ‘n right. Each one has a clue for you!