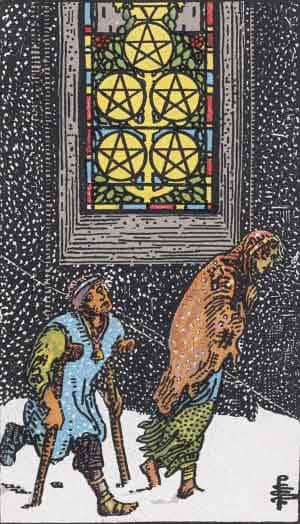 General meaning:  The Five of Pentacles signifies a difficult change in fortune. This is often an indicator of loss such as a job loss or losing your home. Financial hardship creates worry and anxiety.  Losing your way in life.  Living without the basic necessities.  Being a broke ass.  Bad decisions lead to financial strain or ruin.  This card can also indicate being “out in the cold” in a situation.  Being left behind.  Leaning on a partner during a hard period.  Codependent relationships.  Help is there but you are unable to see it.  The pity party.  Poverty consciousness: the feeling that you will never get ahead or that you don’t deserve better.  A vow of poverty.  Knee problems.

Reversed: Help arrives. Ready to accept the help being offered. Financial shift towards rebuilding.  Coming out of a hard time and starting again.  Awareness of where you went wrong.  A new job or home after a period of uncertainty.  Going home after a disaster (ex: returning home after a tornado).  Shelter. Refugee. Welfare. A period of healing.  Moving past worry towards a hopeful new future.  Leaving the mean streets.

Affirmation: “I can get through this.”

Theme song: “Ain’t With Being Broke” by Geto Boys

Journaling prompt: When have you faced a hardship?  Have you ever been down on your luck? What got you through it?  Journal about your most broke down break throughs.

You feeling that pain
It’s called being broke
Being out in the street
Ain’t no mutha effin’ joke
You once lived large
So did MC Hammer
But shizz got hard
You headed for da slammer
Keep on keepin on
Cause help is there
Do what you gotta do
Though it feels unfair
Don’t be pitying
Hold your head up high
Even a broke ass
Can still be fly.