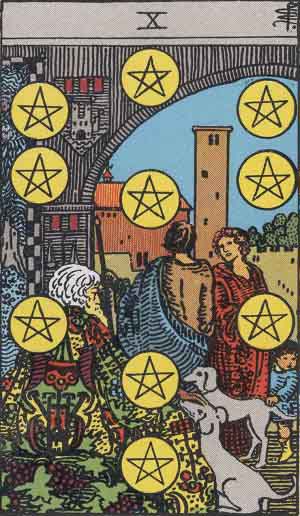 Ten of Pentacles – this is the card that I most often associate with wealth.  This can be inherited wealth – or accumulated wealth through good investments and hard work.  The Ten of Pentacles symbolizes the secure family, where everyone is provided for.  This is the “legacy” or “estate” card. 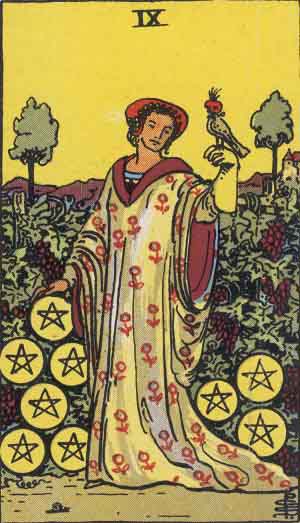 Nine of Pentacles – one look at the woman in the gorgeous garden and you know she’s living the glamorous life.  The Nine of Pentacles symbolizes the fruits of the labor, blossoming at last. Luxury, bling, being in a position to indulge in the finest things life has to offer. This card can also represent a wealthy woman. She’s in the money! 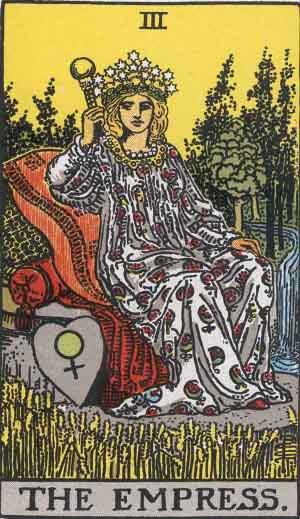 The Empress – like the Nine of Pentacles, we have another woman surrounded by a lush garden, a symbol of abundance.  This is the card of the big harvest. Blinged out to the max and livin’ large. 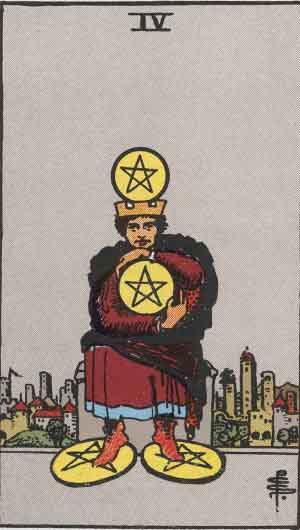 Four of Pentacles – this card represents the miserly kind of wealth. Think: the person who squeezes the quarter until it squawks or the dude who lives like a pauper, hoarding his wealth.  It’s not always a bad card though – it can simply be the person is a saver rather than a spender – or a person who values and seeks security. 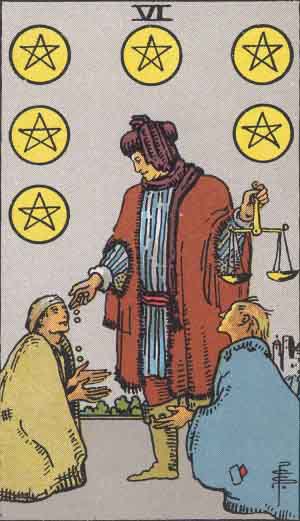 Six of Pentacles – this card is usually associated with charitable acts – so this could symbolize a wealthy philanthropist. It can also suggest having money to burn or “making it rain.” 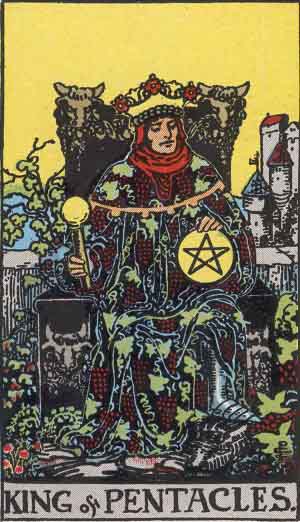 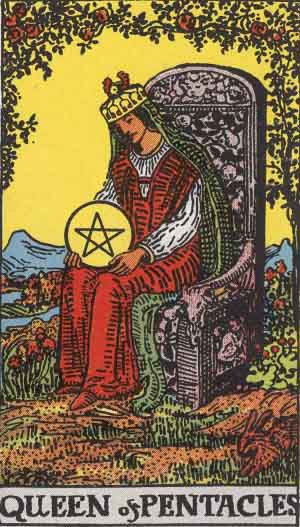 Queen of Pentacles – here we find another woman in a garden, a symbol of fertility and abundance, with a big ole coin in her lap. This is the well-to-do woman, who has everything she could possibly need. Like the King of Pentacles, she can manifest money – or goals. She’s set for life! 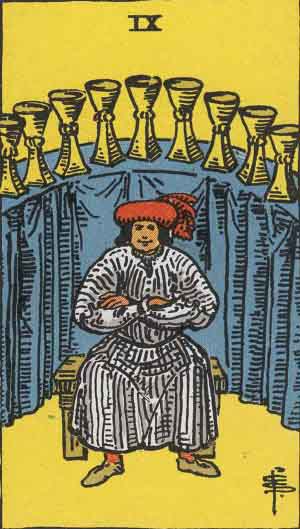 Nine of Cups – even though we have zero bling-y Pentacles in this card, the Nine of Cups (aka the “wish card”) can represent having everything you could possibly want.  It’s a card of indulgence.  This guy doesn’t need to worry about nothing because he’s got it going on – and he knows it.

Note:  In a tarot reading, Pentacles are the cards to look for when it comes to wealth.  BUT you want to see the “mature” cards.  An Ace, for example, shows the potential or beginning of wealth, not the actual harvest. Also, the Wheel of Fortune can indicate a “change in fortune” but I want to see a strong money card with it such as Ten of Pentacles. That would reinforce the Wheel as a change in financial fortune.