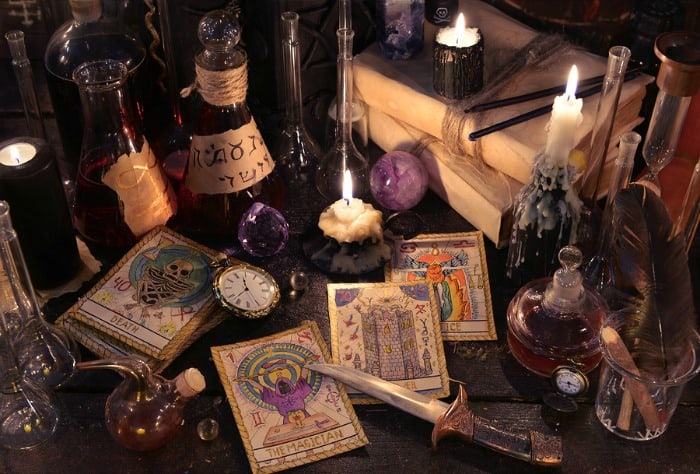 Uncrossing kit.  Uncrossing? Huh. I studied the box carefully as I turned it in my hands. It smelled nice.

“Is this really going to work?” I asked the clerk as I continued to inspect the contents.

“Yes yes..” he assured me with a wave of his hand. “Just make sure to follow the instructions to the letter.”  Nodding, I paid and left.

After a string of unfortunate events, my roommate and I were convinced that we had bad luck. Nothing seemed to work (at least that is what we believed) so we decided that it was time for an unorthodox solution.  One of the burner hippies at work mentioned something about magic spells and pointed me to the Magickal Childe, the renowned occult shop in New York (sadly, now defunct).  And that’s where I bought that Uncrossing Kit.

As a former practicing Catholic, I knew all about candles and incense.  Heck, back in the day, I petitioned all the saints for various things.  Sometimes it worked.  A lot of times…it didn’t.  (There is a difference between petitioning and pestering – had to learn that one the hard way.)

But magick? I wasn’t sure what to think.

Ultimately, it didn’t matter what I thought because this bad energy needed to go.

That night, we gathered the supplies, lit the candles and incense, and started the ritual.  We held hands and began chanting the invocation together, thinking that this might give the magic a little kick.

Suddenly, something shifted in the room.  It was like the air dropped. I can’t explain what that felt like except we both sensed it and freaked the hell out.  “What was that?  Did you feel it?” I whispered.  My wide-eyed roomie nodded silently.

Spooked, we packed up the remnants and threw them away per the instructions and spent the rest of the night chain smoking, worried that we unleashed something.

But a funny thing happened…my luck did seem to change.  (My roommate’s…meh…not so much.)  Life got progressively better as the months and then years passed.  It worked!

But was that it? Did that kit really “uncross” me? I certainly felt something.  But the truth is…something else had shifted.  Me.

I began taking personal responsibility for my life.

Which meant: making better, more conscious choices than the ones I had been making up to that point.

The more mindfully I lived, the more my life improved.

Don’t get me wrong – I do believe in golden opportunities, prayer, magick, ritual, luck, law of attraction, positive thinking, charms, feng shui and all that luck-generating jazz.  Heck, I’ve got every lucky accessory known to man (well, except any of that animal parts stuff).  I’m nice to all the gods – just in case.

But hear this: none of that stuff works if you don’t live your life right.  A magick kit can only go so far (ex: former roommate is still a hot mess all these years later).  It’s up to you to put right thought behind your words, actions, plans, and motives.

So burn your candles and light that incense. Stick positive affirmations all over your house.  Step over cracks and carry a lucky coin.  But don’t skip the most important part: you.

You are pure magic. My state is right in the middle of America’s Richest and Poorest States.  Where is yours?

Just in time from Autostraddle: your fall astrological fashion forecast!

Spooky + cool: behind the scenes at the weekly Williamsburg seance!

I loved listening to Jidenna talk about his father, moving to Brooklyn, and more:

Some great advice from Cosmic Faery on how to give a good tarot reading via email.

This text exchange between a mother and daughter is everything.

Seven  things that should never be said in a wedding toast.

Worried that your negative thinking is attracting bad things? Louise Androlia has a thoughtful post for that.

Must read: For Diamond Reynolds, trying to move past 10 tragic minutes of video.

When the Death card means death.

Oh how I love Tanya Geisler: Do it. You’re ready enough.

This: ketchup sandwiches and other things stupid poor people eat. My mother talked about growing up eating sandwiches with sugar and butter.

Hard to believe this one: a crazy ass story about a woman who wanted her daughter to be sick.

Marie Claire gives an official review of the new iPhone 7.

Wisdom from Annika Martins: We are all works in progress.

Barbara Moore just released this beauty: Your Tarot Your Way – Learn to read with any deck.

Mary Ellen Mark is my favorite photographer.  I want this: Tiny, Streetwise Revisited.

This is an interesting tarot concept deck: After Tarot.

On my wish list: this new tarot deck from Collette Baron-Reid – The Good Tarot.

Just got word that my book, The Tarot Coloring Book, will be in-house soon.  The official launch date is November 1st!  WOW.

If you’re in Minneapolis, be sure to sign up for this Tarot For Total Beginner’s Workshop with me!

I’ll be teaching two workshops at the Boston Tea Room in November: Tarot For Total Beginners and Going Pro. If you’re in the Detroit area, come on down!

Eyeliner in every shade of the rainbow

Leaves falling to the ground

Lucky by Til Tuesday