Star School – Lesson One: Meet your teacher…and the symbols

Welcome to Star School! Before we begin dipping into astrology lessons, I feel it’s important for you, my dear reader, to be clear on my astrology background and philosophy.  That way, you can decide if this is a series that is your cup ‘o tea…or not.  (No worries on the not part.  I’m cool with that and have some lovely referrals further down the post to steer you in a direction that might make better sense for you.)

My introduction to astrology came before I ever laid eyes on a tarot deck.  When I was 15, my best friend’s mother offered to do my chart.  Like most teens, this was a time in my life that was very confusing and I longed to understand myself better.  As she pored over the calculations and symbols, she pointed them out and told me what they might mean for me.  I was instantly hooked and wanted to learn more.  So began my studies – and I’ve been playing around with the stars ever since.

Once I discovered tarot (only a few months later while searching for more astrology stuff in a bookstore), the cards became my main instrument but I continued to study astrology. (I like to say that the cards chose me.)

Over the years, I’ve explored astrology and watched how it showed up in my life and the lives of my clients.  I’ve studied how it affected world events and trends in my own life.  I used it to plan my business moves and the births of my children.  I’ve figured out which people work best in my life and how to handle the ones that were not in cosmic alignment.  In other words, I’ve used my own life like a little petri dish to test out all this astro-jazz.  And I found it works.  At least it does the way I play with it.

Just so we are ultra clear: I’m not formally trained.  I don’t have any certification.  I don’t consider myself an “advanced astrologer” by any stretch.  But I have a damn good grasp of it and I have learned how to tweak my own fate by rolling with the energy. Because I believe that there is no such thing as a “bad chart” or “bad aspects” – just challenges and opportunities.  Astrology can help us to be aware of how the energy is operating within us and around us – but we always have free will on how we want to deal.

I’m not a passive bystander in my fate.  I don’t think you need to be either. My mission in this series is to help you understand your potential, your challenges, and how to work with what you’ve got and what’s happening in the now.

Star School is designed for complete beginners who are looking for a fun, practical approach – and totally intimidated by what I call “astrobabble.”

What is astrobabble?  Let me give you an example.

My husband and I were having a “smart war” to see who was smarter.  (We’re both ruled by Mercury so we can be insufferable when it comes to these things.)  Of course, he threw down the first gauntlet by talking about physics and Taoism – two subjects I know nothing about and might feel pretty stupid if I even tried to go there.  After he was done, I opened my ephemeris (an astrology book of dates with all sorts o’ neat little symbols and calculations) and began doing math out loud and educating him on what the current astro forecast was.  “As you probably do not know, currently Pluto is in quincunx to Jupiter while Saturn is squaring the Moon and Mercury.  Oooh and look what it’s doing to your chart.  Oh my.  And Neptune is opposing your Sun at a perfect 180 degrees!” or some such thing.  I was spitting mad astrology game. And I went on and on, tossing out geometry stuff like some phony math genius.  Point was made but you know what?

I hate that kind of thing.

When astrology is explained in that manner, it renders it useless for the average Joe.  It may make you sound smart but if it cannot clearly help someone, what is the purpose?

I’m a practical gal. I prefer to have something that I can actually use to make my life better.  I’m not interested in the history part or the mythology. It’s just not my bag but if it’s yours, that’s cool. (Note: I have Capricorn intercepted in my third house of mind and communication – on the outside, I’m philosophical but on the inside, my brain is hard-wired for ultra-practicality.  You’ll learn more about interceptions in time but know this about me: my brain is like a Ferenghi’s.  If I can’t use the info, it’s not valuable to me. I’m also a bit of a control freak but that’s another story.)

Now that you know a bit about my astro-background, let’s get started.

We will NOT be doing the chart calculation – there are many computer programs that do that for you.  We’re looking to interpret charts and transits – plus other cool miscellaneous stuff I’ve learned over the years (like to how to time your biz stuff or how to manage an enemy!).  At some point, there will be math – but don’t worry…I’m going to make it easy for you, even if you flunked high school geometry (FYI: I got a D in that class).

For this exploration, you’ll want to grab a copy of your astrology chart.  If you don’t have one, I recommend getting a free one at astrodienst.com or alabe.com.  (I’ll be sharing my own chart and ones from different peeps often so that you can see it in action!)

If you want to purchase your own astrology software, I recommend Solar Fire or Time Passages.  I’ve used both and they both work well.  You can also get an app on your phone.  I have the Time Passages Pro app, which allows me to do charts and transits on the fly!

You’ll also want a notebook to jot down information.  Not just stuff you learn here – but I’ll also recommend other places to gather info.  I suggest exploring many astrology sites so that you get a well-rounded opinion (never take one astrologer’s interpretations as the sole gospel).  I’ve found that I get wonderful new perspectives by reading other astrology tutorials.

You’ll also want to get an ephemeris.  When you first open it, you might be overwhelmed.  No worries – in time, we’ll get you clear on how to read it.  For now, just get it and relax.  You’ll want one for the first century and one for the upcoming one. The former will help you to look at people’s birthdates if they were born before 2000.  The second one will allow you to look at younger folk’s charts plus future transits so you can learn how to max out those planets like an astro-badass.

There are two types of astrology:

Both types are valid – I recommend exploring both so that you can find which type works for you.

The type of astrology we are working with in this series is Tropical.  Although I’ve dipped a toe into Vedic Astrology, I found that Tropical worked better for me.  You may find in your studies that you prefer otherwise.  (Or maybe you’ll use both.)

Why do you need to know the difference?  So that you know what you’re working with, that’s all.  Again, I advise you to study both and then pick the one that you like better.

(PS it is also worth mentioning that Chinese astrology is another system based on animals.  Learn  more here: Chinese zodiac. )

Let’s get started by getting familiar with the symbols.  After all, you’re going to be looking at these guys a LOT.

The signs, planets, and their symbols:

I believe it’s best to learn these in order.  They will ALWAYS fall in the same order.  Get these down so that you can recognize the symbols and rattle them off like a boss: 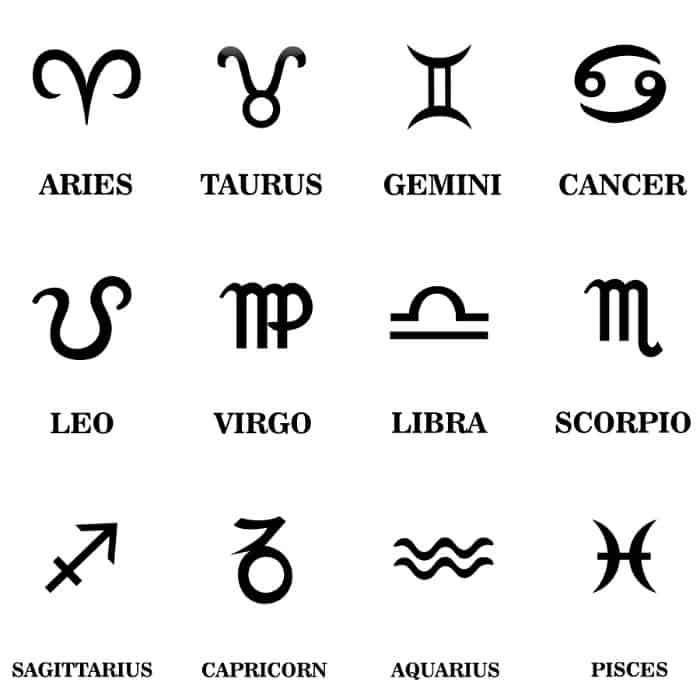 Study the symbols and memorize them in this order (Note – Uranus and Pluto each have two different symbols. I use the Uranus symbol on the right and the Pluto symbol on the left):

Lunar Nodes – Past lives and destiny 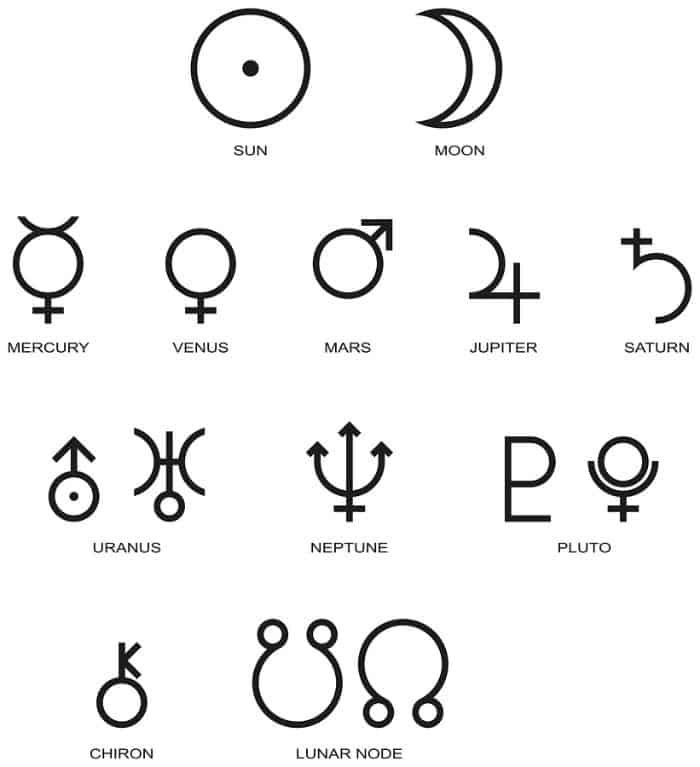 I suggest copying the symbols in your notebook.  You may also want to create little flashcards to help you memorize the symbols.

This is where we will finish off today.

Next month, we will go through the astrology signs and give you some great keywords and qualities to get acquainted with the energy behind each sign.  I’ll also talk about why I think astrology was created by a Virgo.

Keep gazing at the stars and stay curious,

A great astrology book for total newbies: The Only Astrology Book You’ll Ever Need

My favorite astrologer:  Starcana  Best out there, in my opinion. Compassionate and right on.

This series from Little Red Tarot is wonderful for beginners: Astro DIY

Always a good, smart read: Sagittarius Mind <-I learn a lot from this guy.

I really dig Annabel Gat of Root Astro. She really knows her stuff.

I’ve been noticing this astrologer – you might want to also: Astrology by Mecca

images from stock photography and taoxproductions